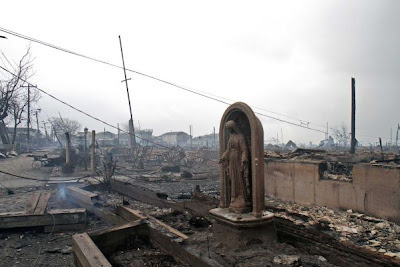 In the aftermath of Hurricane Sandy’s destructive passage across the East Coast, Cardinal Timothy Dolan of New York expressed his “solidarity in love and prayer with so many who are suffering.”
“What do you say? Our hearts are broken when you see the loss of life, the grieving families, the devastation, the ruination,” Cardinal Dolan told Fox News co-anchor Martha MacCallum Oct. 31.

“But throughout all of it, too, you begin to see a glimmer of light and hope: people coming together.”
He said that people can become “selfish” and “violent” or they can “pitch in, in solidarity and community, to help one another, to help rescue one another.”

“Thanks be to God, that’s what’s happening throughout Connecticut, New Jersey, and throughout our beloved New York,” the cardinal said. “The best, the most noble sentiments of people are coming out.”
The storm killed at least 80 people across the U.S. and 38 people in New York City alone after making landfall Oct. 29. Hundreds of thousands of people in New York City remain without access to power, water, heat and transportation.

Cardinal Dolan said Catholic Charities and Catholic health care facilities are in action and are helping those in need. He plans to visit some of the affected areas.

An iconic photo of a lone statue of the Virgin Mary in front of a destroyed home in the fire- and flood-ravaged Queens neighborhood of Breezy Point caused him particular concern.

“I love Breezy Point,” he said, describing its local pastor Msgr. Michael Curran as “a very close friend.”
“I’m worried because I can’t get in touch with him,” said the cardinal, who added that the priest had told the cardinal he would stay in the area “with my people.”

On Nov. 1 Bishop Nicholas DiMarzio of Brooklyn also commented on the storm.

“Hurricane Sandy has left her trail of death and destruction across our city and region,” he said in his diocese’s newspaper The Tablet.

“We all pray first and foremost for our fellow New Yorkers and their families who perished. While things may always be replaced, we are all mindful of how important our homes are in our lives and so our thoughts and prayers turn to those whose property was destroyed or damaged.”

He announced a second collection in his diocese’s parishes to fund Catholic Charities’ relief efforts for those affected in Brooklyn and Queens, most of whom are middle class or working poor.

Bishop DiMarzio said that the response of faith to natural disasters is “not so much about the question why is there evil but the conviction that the power of God always conquers sin and evil.”

“The deep has come to us in this storm, but we must always be ready to meet the challenge and put out into the deep to meet the needs of those less fortunate than ourselves,” he said. “Please be as generous as you can to help those who are in such great need.”

Both Cardinal Dolan and Bishop DiMarzio dispensed with Catholics’ normal obligation to attend Mass on the Feast of All Saints in their dioceses.

Catholic Charities agencies are performing damage assessments and are reaching out to parishes to offer support. The agency is working closely with government and other disaster relief partners.
Posted by Padre Steve at 1:00 PM