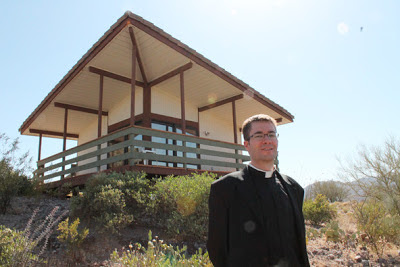 Bishop Thomas Olmsted of Phoenix has established a local house of prayer for priests, where they can come for solitude with Christ and renew themselves for their ministry to the people of God.

Merciful Heart Hermitage is “a place of prayer for priests ... to be drawn into Jesus’ own heart, and through his heart coming into deep relationship with the Father and the Father’s heart,” director Father Eugene Florea, director of the hermitage, told CNA June 19.

Merciful Heart was established on May 21, and was named for its mission to draw priests into the hearts of Christ and God the Father.

The hermitage “has been used” already, Father Florea said, and has drawn interests not only from the priests of Phoenix, but those “from different parts of the country.”

The facility consists of a central chapel, with four poustinia (hermitages), where retreatants can stay in solitude. Each poustinia has its own kitchenette, The Catholic Sun, the newspaper for the Diocese of Phoenix, reported June 12; that way, priests are able to maintain quiet and separation as much as possible.

“There's also a main house, with some extra rooms if necessary, but really the central part of the retreat experience would be in those poustinia,” said Father Florea.

The hermitage is located in Black Canyon City, just 47 miles north of the center of the Phoenix metro area, where many of the diocese's priests are assigned.
The site was formerly the home of the Poor Clares of Perpetual Adoration of Our Lady of Solitude Monastery, who now have a new location to the west of Phoenix.

“Jesus himself said to the apostles, ‘Come away by yourselves to a deserted place and rest a while,’ and this place kind of answers that need,” Father Florea reflected.

The need, he said, “to be renewed in prayer, to be in conversation with the Father, and really be more rooted in that way as beloved sons of the Father, and let all of our ministry flow from that identity.”

On a limited number of occasions each year, the priest will offer some directed retreats in the Ignatian tradition, “so in that case they would meet daily for spiritual direction during that retreat.”

These directed retreats will be a five to eight day experience of the Spiritual Exercises of Saint Ignatius of Loyola, founder of the Jesuits, which were composed to help retreatants choose to live for Christ and meditate on his life.
Father Florea was introduced to Ignatian spirituality at the Institute for Priestly Formation in Omaha, Neb., noting that he “went through their training program in spiritual direction for diocesan priests.”

A pastor of the Phoenix Diocese, Father Florea said he “sensed a call to a deeper contemplative life.”

“I brought that sense of a call to Bishop Olmsted, and he asked if I might be able to live that call out in such a way that I could live at this facility and welcome other priests who want to come and pray ... and receive spiritual direction and retreat.”

Bishop Olmsted wanted somewhere for his priests to be able to spend in prayer and solitude on monthly “desert days,” or days of recollection.

“Priests are free to come and just be on their own in solitude ... some might want to receive spiritual direction,” Father Florea explained, or the sacrament of confession.“Others might want to come for a longer time of retreat,” he said, and “they might meet with me at some point during their stay.”

Father Florea thinks the hermitage is “going to be a great blessing for the Church.”

“I really see it as being so needed, and I think it'll help contribute in a small way to the renewal of the priesthood.”