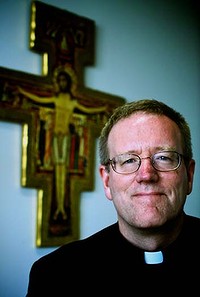 (CNS)  The “dumbing down of the Catholic faith” that impacted catechesis in the mid-1960s “was a pastoral disaster of the first order,” Father Robert Barron told a crowd of about 500 people at the Catholic Media Conference in Denver June 19.
“That’s why many people in my generation left the faith,” Father Barron — creator of the “Catholicism” television series — told conference attendees and members of the public who came especially to hear his evening keynote address. “Don’t dumb down the message.”
That was the second of six suggestions Father Barron gave for spreading thenew evangelization. His other suggestions included “leading with beauty” and “preaching with ardor.”
Father Barron, who currently is rector of Mundelein Seminary in the Chicago Archdiocese, started out by noting that the convention marked the 20th anniversary of World Youth Day in Denver in 1993, where it is widely though that Blessed John Paul II kicked off the new evangelization, which urges Catholics to renew their faith and aims to re-ignite the Catholic faith in traditionally Christian countries where the people’s practice of the faith has grown lax.
In leading with beauty, the Catholic Church will draw people to itself the way the main character in Evelyn Waugh’s “Brideshead Revisited” was drawn to the church — from beauty to goodness to truth, Father Barron said.
Another way the church can spread the new evangelization is to “tell the great story of salvation history” that includes the Old Testament story that set the stage for Christ’s incarnation.
“Don’t turn Jesus into a bland cypher,” he said. “He’s not just another mystic or guru.”
Noting the large number of people in modern society who suffer from addictions, Father Barron said the church must also help people reject “false gods of wealth, honor, pleasure and power,” and teach the anthropology of St. Augustine, who wrote that “our heart is restless until it rests in thee.”
“We need to mock (false gods) publicly,” Father Barron said.
And to combat modern atheism, the church must spread the message of St. Irenaeus, who wrote that “the glory of God is a human being fully alive,” Father Barron said. The saint, who died in the early third century, taught that the creed contains the essential truths of Christian faith.
In Christianity, God and man do not compete with each other, he added. It is only in pagan and atheistic belief systems that gods stand in the way of human progress.
Posted by Padre Steve at 5:48 PM

What the good father said, but I would also add with emphasis, honest dialog about hell. Hell exists and we can go there. The Catholic Church guarantees protection against going to hell. It is the only way to prevail against the gates of hell. Little of the stick. more than the carrot, I think should not be underestimated.

What the good father said, but I would also add with emphasis, honest dialog about hell. Hell exists and we can go there. The Catholic Church guarantees protection against going to hell. It is the only way to prevail against the gates of hell. Little of the stick. more than the carrot, I think should not be underestimated.

Very good words by Fr. Robert Barron. He really sent a message in his speech. What a very timely reminder. There are a lot of evil in the world and that's why we need to strengthen our faith more. Thank you for sharing this!