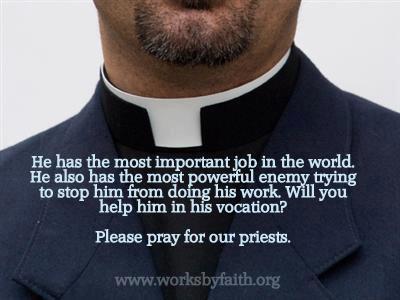 Pray, Pray, Pray for Priests! A Meditation on Something My Mother Taught Me
By: Msgr. Charles Pope

Last week I blogged on how priests pray for God’s people. indeed, such prayers are built into our daily schedule.
And this post is the other side of the equation, the need that priests have for your prayers. Indeed, I will say, pray, pray, pray for priests. We need your prayers!
I attended another ordination this week, my second this month. It is a good thing for a priest to return each year to his roots, and see other, younger brothers ordained. The rite is so rich and the readings so transformative, the instructions of the rite and the Bishop so necessary. Cardinal Wuerl was in good form and I hope to share some of his thoughts later.
This year though, my heart was heavy as I thought of two brother priests who are in real crisis right now. Pray for them.
Satan hates priests and seeks above all to get to us. Jesus remarked laconically and pointedly, quoting from Zechariah (13:7): Strike the shepherd, and the sheep of the flock will be scattered.’ And thus Satan hates priests and seeks to topple them above all, corruptio optime pessima (the corruption of the best is the worst).
In this regard of praying for priests, I must say, have always felt my mother’s prayers very powerfully. My mother, Nancy Geiman Pope who died in 2005, and is now at home, I pray, with the Lord, always told me that she was praying for me! I often attributed her prayers to her tendency to worry. But I have learned of the power of her prayers, and the necessity of them. She said the Lord had told her that Satan wanted me and all priests, and that she had better pray for me. I never doubt she did, and still does.
I remember once, a week before my ordination in 1989, I was up on the roof of our family house, cleaning out the gutters. She came out and told me to come down from the roof at once and that she would hire some one to clean them. She insisted, I was to come down at once. She explained later that her concern was that I, so near ordination, was now a special target of the evil one.
She always told me she was praying for me. I usually thought she was just fretting. But, as I have seen too many of my brother priests struggle and fall over the years, I have come to see her wisdom and the need for her prayers. I have also come to value the prayers of so many of my parishioners who have told me they were praying. Yes, I need a hedge of protection. And so do all other priests. Pray for priests! Pray, pray, pray!
My mother has long since gone home to the Lord. But I still feel her prayers. Somehow she knew I needed them in a way that I, in my pride, did not always know. But I have come to know.
Thanks be to God, I have been a faithful and fruitful priest for almost 25 years. But I know it was not me. It was the Lord and the prayers of so many, like my mother, who have prayed for me.
Back in my 33rd year of life and 5th year of priesthood I was severely attacked by the evil one. He made his move and sought to discourage and destroy me. He did not succeed. My mother and others were praying. My parishioners too, saw my distress and rallied to pray for me and hold me up. And now, almost 20 years later, I feel strong, alive, joyful and grateful.
But I am no fool, Satan will try again. I pray only for the prayers of God’s holy people and for my own sober awareness of the need to pray and to fulfill the mandate of the Lord who said, Watch and pray so that you will not fall into temptation. The spirit is willing, but the flesh is weak (Matt 26:41)
Yes, somehow during Saturday’s ordination of six news priests, I was joyful, yet sober and prayerful for two for my brothers who are suffering. I thought too of at least a dozen I have known who fell under the burden of office and are no longer in the active priesthood.
And somewhere, in the midst of all of it, my thoughts stretched to my mother. Thanks Mom, for your prayers, and for your wisdom. You knew that precious gifts, like the priesthood, come also with crushing burdens and temptations that require sober and vigilant prayer. One day you called me down from the “roof” of my pride and told me to keep my feet on solid ground. Yes, you knew, and you prayed. You warned and prayed some more.
Thank you mom for your prayers. And thank you dear readers and beloved parishioners for your prayers. They have sustained me. Better men than I are suffering, and better men than I have fallen under the burden of office. It is only your prayers that have kept me. Yes, pray, pray, pray for priests. Join your prayers to those of my mother Nancy Geiman Pope, and others in the great beyond, and many others here on this earth. Pray for priests. Pray, pray, pray.
Posted by Padre Steve at 11:30 AM