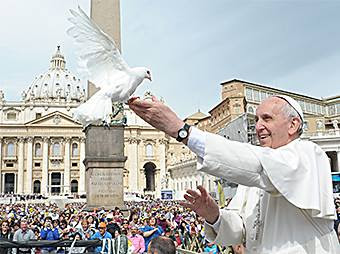 The following comes from John Allen at NCR:

Cognitive dissonance is how psychologists describe the anxiety generated when experience conflicts with one's model of the world. Either the facts have to be recast to fit the model, or the model has to give way in light of the facts, because people just can't live very long in a state of perpetual confusion.


In effect, that's precisely the crossroads at which the Catholic world stands after the first 100 days of the Pope Francis era.
By traditional standards, it's been quiet on the Vatican front. To date, Francis has announced only one truly bold policy move -- the mid-April appointment of a group of eight cardinals from around the world to serve as his kitchen cabinet. Its first meeting, however, isn't until October, and it's still unclear what it might do.
Otherwise, as of this writing, Francis has named 48 new bishops and a handful of second-tier Vatican officials. Most of these appointments were in the works before his election. He's approved a few sainthood causes, erected some new dioceses, and met some heads of state, by no means a departure from business as usual. He's not issued any major teaching documents, nor has he taken any substantive steps toward a much-discussed reform of the Roman Curia.
Because there's been little substantive action, there's been little controversy. Even an April 15 statement that Francis had confirmed a Vatican-mandated shakeup of the Leadership Conference of Women Religious in the United States didn't really roil the waters except in narrow activist circles, with the most common reaction being, "Let's wait and see."
The usual models would thus say that so far, Francis has been all sizzle and no steak. Yet at the grassroots, there's a palpable sense something seismic is underway.
Crowds for Francis have been enormous, forcing police to close the area around St. Peter's Square to traffic as if Mother Teresa or Padre Pio were being canonized. Vendors across Rome report a boom in sales of papal paraphernalia, always a reliable bellwether of popular enthusiasm.
Around the world, there are anecdotal accounts of spikes in Mass attendance and demand for confession, which many attribute to a "Francis effect." Polls, such as a mid-April survey in the United States by the Pew Forum, show overwhelming approval ratings, and the global media remains fascinated well beyond the customary honeymoon period. All indications are that the trip to Rio will shape up as the biggest blowout Catholic party of the early 21st century.
In other words, Vaticanology and the vox populi are at odds.
Perhaps the key to resolving the conflict boils down to this: Francis seems determined to function as a pastor, at least as much as a primate or politician, so the right model may not be the one used to assess chief executives. Rather, it's how Catholics tend to think about a parish priest. Their basic question usually isn't what his policy positions are, but whether he inspires.
Perhaps the root lesson of Francis' first 100 days is that when it comes to spiritual leadership, sometimes style really is substance.
Bishop Jorge Eduardo Lozano of Gualeguaychú, Argentina, says it's a mistake to wait for the real pope to emerge from beneath the largely symbolic flourishes of his early days. Instead, those flourishes are the real pope, insists Lozano, a close friend of the former Cardinal Jorge Mario Bergoglio who worked under him as an auxiliary in Buenos Aires for six years.
"They're an expression of his magisterium," Lozano said in mid-April.
"He's sending a message to other cardinals, bishops and priests that this is what we need to do -- to reach out to people, not being content to wait for them to come to us," Lozano said. "More broadly, he's sending the same message to all Catholics everywhere."
That message can be unpacked in terms of four defining features of Francis' leadership style: simplicity, humility, remaining largely apolitical, and being remarkably accessible to ordinary folks.
Read the rest here.
Posted by Padre Steve at 12:30 PM

Jesus, as Isaiah said, did not come crying out in the streets, did not break the bruised reed nor quench the smoldering wick, yet his coming transformed the universe. What would you expect a "shakeup" to be? The quiet of real sanctity will reach all of our hearts and produce resonating change.