Oh, Love That Will Not Let Me Go: On My Conversion to Catholicism

It seems ironic that a free spirit like me -- who doesn't like hierarchy, routine, and structure -- ended up in the Catholic tradition. 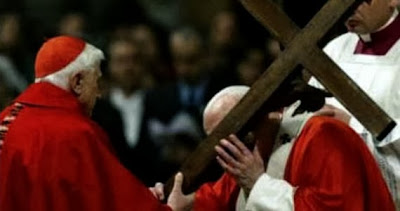 The following comes from Karen Beattie at the Catholic Channel:

There is no way to "return to the faith of your childhood," not really, not unless you've just woken from a decades-long and absolutely literal coma . . . If you believe at fifty what you believed at fifteen, then you have not lived—or have denied the reality of your life. ~ Christian Wiman, My Bright Abyss
The first few months after our then two-and-a-half-year-old foster daughter was placed in our home, she resisted affection. When I rocked her to sleep at night, she would wiggle away from me, never snuggling face-to-face or chest-to-chest. I would hold her tighter until she gave up and leaned against me.
One night, when my husband David was out of town, D's grief at her previous losses (of her birth parents, of her former foster family) seemed too much for her to bear. She had a meltdown when I told her that she had to stop brushing her teeth (she had been brushing for ten minutes, rather than go to bed). She threw her Barbie toothbrush across the slate bathroom floor and started wailing so loudly that I feared the neighbors would think I was torturing her. I tried to pick her up, all thirty-five pounds of her toddler chubbiness, but she was too strong and she pounded my chest until I let her go.
I followed her around the condo for thirty minutes, trying to calm her down. Finally, I corralled her into her bedroom and closed the door. I sat on her pink flowered rug and once again tried to hold her. She was so exhausted that she let me squeeze my arms around her chubby brown limbs. Still, she squirmed, but I held her tight, I felt the pounding of her heart, and the sweat on her cheek.
"Are you sad?" I asked. She nodded her head as she continued to sob.
"You're safe here," I said. "You have so many people who love you. So many people. I will hold you tight until you believe it."
During the year following her placement with us, we tried to keep a regular schedule. We put her into a good structured daycare. At home we created routines and rituals. We ate lunch at noon, had naptime at 2:00, and bedtime was strictly at 8:00 pm. The bedtime rituals were always the same.
Within the combination of our embrace and solid structure, she didn't have to worry about what was coming next. She had the boundaries she needed in order to thrive. A container to work out her grief. A safe place to feel what she needed to feel.
It's not just hurting children who thrive in structure. What might seem like stifling limitations at first can be a path to freedom. Poets work within structure. Writers have a word count they need stay within. Artists learn the rules of painting realistically before they can launch into abstraction.
I think of this when I try to explain to people why I became Catholic.
There are many reasons why I converted. But it seems ironic that a free spirit like me, who doesn't like hierarchy, routine, and structure ended up in the Catholic tradition.
But I changed. And circumstances changed.
The non-denominational churches that I had attended for years, and where I had learned so much and found deep community, were now like a baggy, shapeless coat. While I once thrived in unstructured, ever-changing worship services, now they left me feeling empty and bored and anxious. While at one time I craved long exegetical sermons that fed my intellectual hunger, now I felt I would never get all of my questions answered—and that God was a total mystery to me. Where I once longed for the newest and latest, I now longed for the depth and stability of tradition.

Read the rest here.
Posted by Padre Steve at 3:00 PM