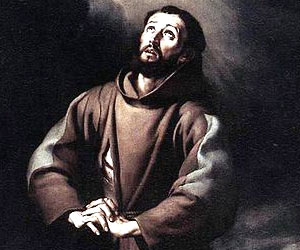 On Friday, Oct. 4, Pope Francis will visit the city of Assisi, the birthplace of St. Francis. The Pope will depart from the Vatican at 7 a.m. by helicopter and will land around three quarters of an hour later at the sports field of the Seraphic Institute of Assisi, where he will meet with disabled and sick children.
At 8.45 a.m. he will make a private visit to the Shrine of St. Damian to pray, and from there will proceed to the archbishop's residence, where he will meet with the poor assisted by Caritas. After this meeting he will transfer by car to the Superior Basilica of St. Francis where he will be received by the convent friars and will pray in the crypt where the saint is buried.
At 11 a.m. he will celebrate Holy Mass in Piazza San Francesco. Following the Eucharist he will proceed to the Caritas reception centre near the railway station of Santa Maria degli Angeli where he will have lunch with the poor from the city centre. After lunch he will make a private visit to the Hermitage of the Prisons, where he will pray in St. Francis' cell. At 3.15 p.m. he will meet with clergy, consecrated persons and members of the diocesan pastoral council in the cathedral of St. Rufino.
From there he will transfer to the Basilica of St. Clare to venerate the body of the saint and pray in silence before the cross of St. Damian. He will subsequently proceed to the Porziuncola in Santa Maria degli Angeli and at 5.45 p.m. will meet with young people on the terrace in front of the basilica. At 6.30 he will transfer to Rivotorto where he will pray privately in St. Francis' hovel and at 7.15 p.m., after greeting the authorities who received him in the morning, will begin his return trip by helicopter to the Vatican, where he is scheduled to arrive at 8 p.m.
Posted by Padre Steve at 10:00 AM