The Priesthood and the Choice 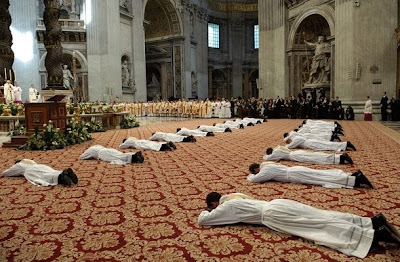 The following comes from Jeffrey Tucker at Crisis Magazine:

Iheard an excellent homily last week, delivered by a young priest who spoke with passion and energy. It was clearly his own take on how the Gospel reading for this daily Mass spoke to him. He crafted it to offer lessons to us. It was beautiful, but that wasn’t what struck me. What moved me most this day was the very existence of this man and his vocation. I had a sudden and overwhelming sense of gratitude.
I’ll try to explain why.
There were only about ten of us in attendance. He crafted that homily for us. It required that he read ahead of time and think hard. He had clearly done some additional reading on the topic. He probably spent some time in prayer. Then he delivered it and could only hope that people would listen and learn from what he said. He does this every single day. And he will do this the whole of his life.
I have some sense that people take this skill for granted. For my part, I marvel at it. If someone asked me to stand up and say something intelligent about the day’s readings, I would sweat it out and probably flop. Most people would. And yet we somehow assume that the talent to do this is built into the genetic code of a priest—and if he ever fails, he will certainly hear about it.
Not only that, everyone in the parish assumes that the priest should be there at every instant to serve us in every conceivable way—on our terms. Maybe we will be faithful or maybe not. Maybe we will lean on the priest only in hard times, or in big ceremonial occasions like weddings and baptisms but otherwise pay no attention whatsoever.
We are happy to lose interest in the Catholic faith for months, years, or decades. This is a luxury afforded to the laity. But we believe that when we are ready, the priest will be there with all the answers, with a forgiving heart, and welcoming arms. He will hear our confession, happily, and rejoice in our return. He will baptize our children, marry them later, and be there when our lives have fallen apart. We can lose the faith at will; he, on the other hand, must never waver, else we will be scandalized and cry hypocrisy.
He is a servant to a much greater extent than other callings. He is called upon to understand—and fully explain and even solve—our troubles, issues, difficulties, struggles, failings, sins, and to comprehend and care about the endless details of our lives, to the precise extent to which we share them and call upon his intervention. In the confessional, he is (contrary to myth) not a judge but a dispenser of the grace of God’s forgiveness and comforting love.
Meanwhile, no one really ever asks us to understand his failings. Far from it: we imagine ourselves in the position of being his judge, never dispensing forgiveness but more commonly suspicion, detraction, and calumny. Catholics themselves are severe enough in this respect, but the rest of the world is ever more disapproving of the priesthood itself. His very existence is a provocation to debate every issue from the existence of God to the meaning of life. He is a lightening rod and yet must act nonchalant about this fact, going about his business as if to ignore the suspicions and doubts all around him.
Please read the rest of it here.
Posted by Padre Steve at 6:51 PM