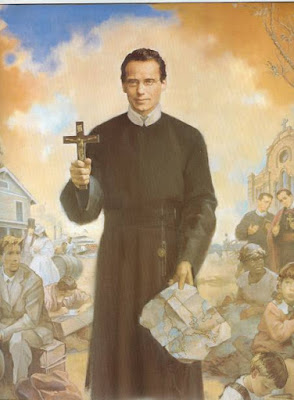 Today is the Feast of Blessed Francis X. Seelos!  The following comes from the American Catholic:

Born in southern Bavaria, he studied philosophy and theology in Munich. On hearing about the work of the Redemptorists among German-speaking Catholics in the United States, he came to this country in 1843. Ordained at the end of 1844, he was assigned for six years to St. Philomena’s Parish in Pittsburgh as an assistant to St. John Neumann. The next three years Father Seelos was superior in the same community and began his service as novice master.

Several years in parish ministry in Maryland followed, along with responsibility for training Redemptorist students. During the Civil War, he went to Washington, D.C., and appealed to President Lincoln that those students not be drafted for military service.

For several years he preached in English and in German throughout the Midwest and in the Middle Atlantic states. Assigned to St. Mary of the Assumption Church community in New Orleans, he served his Redemptorist confreres and parishioners with great zeal. In 1867 he died of yellow fever, having contracted that disease while visiting the sick. He was beatified in 2000.

Father Seelos worked in many different places but always with the same zeal: to help people know God’s saving love and compassion. He preached about the works of mercy and then engaged in them, even risking his own health.
Quote:

“To the abandoned and the lost he preached the message of Jesus Christ, ‘the source of eternal salvation’ (Hebrews 5:9), and in the hours spent in the confessional he convinced many to return to God. Today, Blessed Francis Xavier Seelos invites the members of the Church to deepen their union with Christ in the sacraments of penance and the Eucharist” (John Paul II, beatification homily).
Posted by Padre Steve at 9:32 PM