Our Lady of Good Remedy 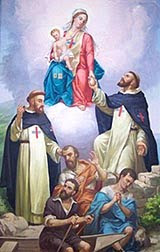 Today is the Feast of Our Lady of Good Remedy. It is a special devotion of the Trinitarians of St. John Matha.


800 years ago Christians were being captured and sold into slavery by the thousands, and nobody knew what to do about it. Then, in the year 1198, a man had an idea. St. John of Matha founded the Trinitarians to go to the slave markets, buy the Christian slaves and set them free. To carry out this plan, the Trinitarians needed large amounts of money. So, they placed their fund-raising efforts under the patronage of Mary. They were so successful at that, over the centuries, the Trinitarians were able to free thousands and thousands of people and to return them safely home. In gratitude for her miraculous assistance, St. John of Matha honored Mary with the title of "Our Lady of Good Remedy." Devotion to Mary under this ancient title is widely known in Europe and Latin America, and the Church celebrates her feast day on October 8. Our Lady of Good Remedy is often depicted as the Virgin Mary handing a bag of money to St. John of Matha. When in need - for whatever reason, but especially where you have had difficulty obtaining help - invoke the aid of Our Lady of Good Remedy, and you will surely experience the power of her intercession.

For more on this Feast of Our Lady please click here.
Posted by Padre Steve at 5:00 AM