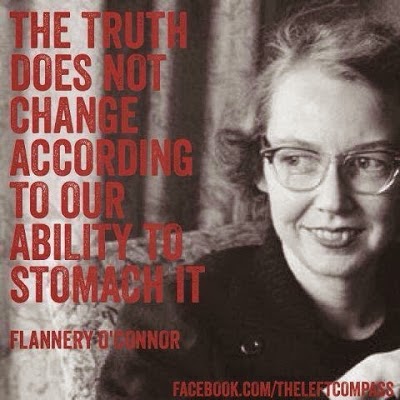 The following comes from The Cardinal Newman Society:
A college student in the 20th century wrote a letter to a Catholic writer asking for advice because he felt like he was losing his faith.  Flannery O’Connor, who was born in March of 1925, responded with a letter of encouragement that is still applicable to college students today.
O’Connor told the student, “If you want your faith, you have to work for it” and continued by stating that “[Faith] is a gift, but for very few is it a gift given without any demand for equal time devoted to its cultivation.”
She suggested that the college student read a book that presents the Christian worldview for every book that he read that was “anti-Christian.”  O’Connor wrote:

One result of the stimulation of your intellectual life that takes place in college is usually a shrinking of the imaginative life. This sounds like a paradox, but I have often found it to be true. Students get so bound up with difficulties such as reconciling the clashing of so many different faiths such as Buddhism, Mohammedanism, etc., that they cease to look for God in other ways. Bridges once wrote Gerard Manley Hopkins and asked him to tell him how he, Bridges, could believe. He must have expected from Hopkins a long philosophical answer. Hopkins wrote back, “Give alms.” He was trying to say to Bridges that God is to be experienced in Charity (in the sense of love for the divine image in human beings). Don’t get so entangled with intellectual difficulties that you fail to look for God in this way.

… What kept me a skeptic in college was precisely my Christian faith. It always said: wait, don’t bite on this, get a wider picture, continue to read.

… Even in the life of a Christian, faith rises and falls like the tides of an invisible sea. It’s there, even when he can’t see it or feel it, if he wants it to be there. You realize, I think, that it is more valuable, more mysterious, altogether more immense than anything you can learn or decide upon in college. Learn what you can, but cultivate Christian skepticism.  It will keep you free – not free to do anything you please, but free to be formed by something larger than your own intellect or the intellects of those around you. I don’t know if this is the kind of answer that can help you, but any time you care to write me, I can try to do better.
Source: The Habit of Being: Letters of Flannery O’Connor

Read more at A Priest in Chatham.

She was a real treasure! Her writing is still relevant and moving to this day. Just got my minimalist Flannery shirt in the mail, and can't wait to take it for a spin