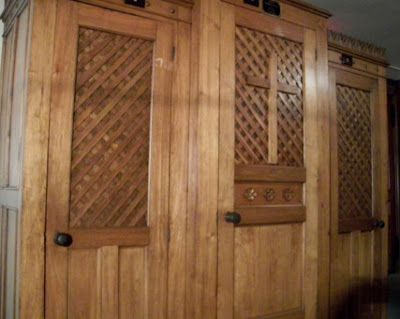 (RNS) The Rev. Janusz Kukulka can’t say for sure that his parishioners are sinning more, but they sure are lining up at the new confessional booth to tell him about it.

For years, Kukulka, was content with absolving sins in a private room marked by an exit sign to the right of the altar St. Mary the Immaculate Conception Catholic Church.
But something happened during Lent this year. For the first time, Kukulka really noticed the two confessionals missing from the rear of his church. They’d been gone for four decades, ripped out during the 1970s to make room for air conditioning units during a renovation inspired by the Second Vatican Council.
They must have been a thing of beauty, Kukulka thought. He imagined their dark oak paneled doors and arched moldings to match the Gothic architecture of the church designed by renowned 19th-century architect Patrick Keely.
Their absence was striking, especially when the Archdiocese of Hartford had asked parishes to extend their confession hours during Lent, part of a public relations campaign to get Catholics to return to the sacrament of reconciliation.
So, one Sunday Kukulka announced his desire to the congregation. “I told them I wanted a visible confessional,” he said.
He got one within a week.
Parishioners Timothy Conlon and Patrick Knott moved quickly to fulfill their priest’s wish. They thought about building a confessional, but the cost was prohibitive for the cash-strapped parish. So, they turned to the Internet, where Conlon found an antique confessional for sale in Iowa on eBay.
Conlon flew out to Iowa and drove the confessional back to Derby. Knott’s wife, Elisa, donated the $1,100 cost of the confessional in honor of her parents, who were devoted church members. A plaque above the confessional bears their name.
“It’s a big hit,” Conlon said.
Patrick Knott, who had never confessed in the private room, said a long line formed in February when Kukulka held the first confession in the booth. He was the first to try it out.
“I got celebrity status,” he said. “It wasn’t bad.”
Kukulka said confessions have been up ever since at the church.
But Thomas Groome, professor of theology and religious education at Boston College, doubts that an old-school confessional will be enough to keep the momentum going.
Confessions among American Catholics have been on the decline for decades, a trend many theologians attribute to changes introduced by the modernizing reforms of the Second Vatican Council (1962-1965).
In an attempt to make confession less about sin, many churches during Vatican II shuttered their confessional booths and opened “reconciliation rooms” where the faithful could sit face-to-face with a priest and talk about their sins in the context of self-improvement.
“The church was moving in a direction where priests were supposed to be counselors instead of judges,” Groome said. “The problem was that many priests didn’t have the counseling or spiritual skills, and people didn’t like the openness. They wanted the anonymity that comes behind the grill.”
When Monsignor Stephen DiGiovanni arrived at St. John the Evangelist Roman Catholic Church in Stamford, Conn., in 1998, he found two confessionals nailed shut during Vatican II.
He closed off the church’s reconciliation room that featured “two beat-up old chairs and a crummy little screen” and opened up the confessionals. In 2009, he told a New York Times reporter that more than 400 people partake in the confessional rite every Sunday.
That number continues to grow, and the church has added more confession times.
“When I began as a priest in 1977, it was about ‘I’m OK , you’re OK, we don’t have to confess anything,’” he said. “We shouldn’t be guilt-ridden Catholics, that’s all true, but we should be contrite.”
Kukulka couldn’t be happier with the new confessional.
There’s just one small problem: Voices inside the confessional echo through the sanctuary.
(Ann Marie Somma is the editor of Hartford Faith & Values.)