Saint of the Day: Conrad of Piacenza 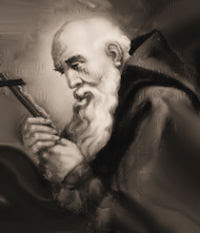 Born to the nobility. Married to Euphrosyne, the daughter of a nobleman; the two led a pious life in the world. One day while hunting, Conrad ordered attendants to set fire to some brush in order to flush out the game. A strong wind carried the flames to nearby fields, forests, towns and villages, and Conrad fled in panic. An innocent peasant was imprisoned, tortured into a confession and condemned to death for the fire. Remorseful, Conrad stepped forward to confess, saving the man. He then paid for the damaged property, selling nearly all he owned in order to raise the cash.

Conrad and his wife saw the hand of God in the dramatic events, and chose to give the poor everything they had left. They then separated, she to a Poor Clare monastery, he to a group of Franciscan tertiary hermits. Conrad lived such a life of piety that his reputation for holiness spread quickly. He had the gift of healing. Visitors destroyed his solitude, so he fled to a the valley of Noto, Italy in Sicily where he lived 36 years in prayer as a hermit.

Legend says that when the Bishop of Syracuse visited him, the bishop asked if Conrad had anything to offers guests. Conrad said he would check in his cell. He returned carrying newly made cakes, which the bishop accepted as a miracle. Conrad returned the bishop‘s visit, and made a general confession to him. As he arrived, he was surrounded by fluttering birds, who escorted him back to Noto.

Conrad died kneeling before a crucifix.
Posted by Padre Steve at 5:00 AM