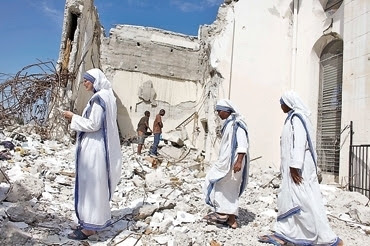 Please pray for the Missionaries of Charity, the Salesians, and all the victims of this horrible violence against innocent people.

India Matters: Four Missionaries of Charity nuns from India were among 16 people gunned down by suspected Islamic fundamentalists on Friday in Aden, Yemen.
A Salesian priest from India who is in Aden at the time of attack has gone missing. “Seemingly they have taken him (Father Tom Uzhunnanil) along, but this is still to be confirmed,” says a message the Salesian Provincial secretary of Bangalore later in the day.
The Mother Teresa nuns were killed when four gunmen stormed an elderly care home in Aden’s Sheikh Othman district. They killed a guard and shot randomly at residents, news agencies reported.
The nuns had been working in the war-torn country for years, a source close to the congregation’s headquarters in Kolkata told Matters India.
Church leaders in India have mourned the nuns’ death.
Bro. Mani Mekkunnel, International Secretary, Montfortian Education, said the religious of India are in communion with the Missionaries of Charity as four of their Indian missionaries have become martyrs in the hands of ISIS in Yemen.
“They died serving the poor in a home for the aged. The Indian Church has become the biggest missionary movement, being present in more than 160 countries. We pray that hatred and violence gives way to love and peace,” the former national secretary of the Conference of Religious India told Matters India.
Reports said the gunmen first told the guard they had come to see their mother. After entered the home, they brandished rifles and opened fire. The dead also included two Yemeni women working at the home, eight elderly residents.
The motive of the gunmen was not immediately known. They fled after the attack, the official said.
The bodies of those killed have been transferred to a clinic supported by medical group Medecins Sans Frontieres (Medicine without Frontiers), medical sources said.
Dozens of stricken family members arrived at the site following the attack, witnesses said.
One official said the attackers were ‘extremists’ and blamed the Islamic State group, which has been gaining ground in Aden in recent months.
But no group claimed responsibility for the first such attack in Yemen. The country has been caught between an Iran-backed rebellion on one side and a growing jihadist presence on the other.
Meanwhile, the Salesians are frantically trying to get information about Father Uzhunnanil. The Bangalore provincial secretary said they received news from Yemen that around 8:30 am on Friday , militants suspected to be either Al Qaeda or Islamic State entered Mother Teresa’s convent.
“Presently we have no information about the whereabouts of Fr. Tom Uzhunnanil who too was in Aden when the incident took place. We had a call from Fr. M.K. George who is currently in Hodeidah. We are trying to establish the facts from various sources.”
The Bangalore provincial has urged all Salesian communities to hold half-hour adoration Friday evening and pray for “the safety of confreres and the sisters.”
Posted by Padre Steve at 10:09 AM