Our Lady’s Message for Belgium: Beauraing and Banneux 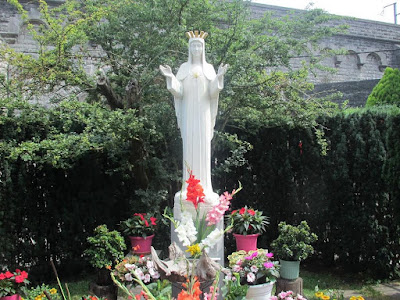 
With a heavy heart, I learned of the terrorist attacks in Brussels that occurred yesterday, March 22.  Belgium is a country that found a place in my heart after I visited that great nation in January 2015.  Among the reasons why I journeyed to Belgium is that lot of my research has focused on one particular Belgian woman named Adele Brise, who immigrated to the United States and then, in 1859, received three apparitions of the Queen of Heaven. I traced Adele’s footsteps in Belgium as I visited the places pertinent to her life, but I was also there to research an obscure devotion to Mary, as well as to better understand the Marian devotions of Belgium.
I had the opportunity to make a pilgrimage to the two great Marian shrines of Belgium, Beauraing and Banneux, where Mary had appeared in 1932 and 1933 respectively. In Mary’s apparitions at these two places she appeared to children and delivered very simple messages. Yet, these were profound messages that are not merely for those living in 1930’s Belgium and Mary’s words can still inspire people today. Mary gave a message to Belgium and now—in this time of mourning—it is time to revisit those messages.

Our Lady of Beauraing

In the village of Beauraing, Mary appeared thirty three times between November 29, 1932 and January 3, 1933 to the Degeimbre and Voisin children.  The messages Mary spoke to the children were to encourage them to be good and to also pray often.
Many have seen Beauraing as a continuation of Fatima for a few reasons. First, Mary appeared in Fatima during the World War I and Beauraing occurred several years before World War II.  So it was that during The Second World War, Beauraing was a sanctuary of prayer that many flocked to during that bloody conflict.  Secondly, Mary revealed her heart to the children, as a golden heart. During Mary’s apparitions at Fatima in 1917, she requested that the children pray the rosary for peace in the world and she also emphasized devotion to her Immaculate heart.
The message of Beauraing rings loud today for the Belgian people in the midst of secularism and terrorism.  Mary wanted people to pray often and always.  Surely, in light of the recent attacks, there are reasons to pray: for those who died; for those who were injured; for law enforcement and emergency personnel; for those who carried out the attacks, and for peace in the world. Speaking to Fernand, one of the children, Mary asked her, “Do you love my son? Do you love me? Well then, sacrifice yourself for me.” A good challenge for us in our own prayer is to make sacrifices so that the will of God may reign in our world and then His peace can rule in all of us. We can sacrifice ourselves most especially by fasting. It is those times when we pray and make sacrifices that we may see the fulfillment of the promise of Our Lady of Beauraing, declared to Gilberte Voisin: “I [Mary] will convert sinners.”
Conversion is at the heart of every apparition of Mary and our society needs conversion. The very hearts of terrorists need conversion so they will not take innocent life. We also need conversion to turn to God and to be persistent in our prayer.
One of the descriptions given about Our Lady of Beauraing stated that she smiled often during her apparition.  Mary wants to smile on us, her children, when we strive to “be good” and to pray often.  I can only imagine that the smile of Mary has turned to sadness over the secularization of Belgium and the recent terrorist attacks. Let us then renew our prayerful efforts  so that Mary can smile, once more, over the conversion of sinners.

Our Lady of Banneux

Nearly a fortnight following the conclusion of Mary’s apparitions in Beauraing, an eleven year old girl name Mariette Beco received eight visits from Mary beginning on January 15 and ending on March 2, 1933.  Due to the closeness in time of Beco’s claims and the end of the Beauraing apparitions, many thought Beco was making the apparitions up.  But these doubts would soon subside.  Just as Beauraing was seen as a continuation of Fatima, Banneux could be seen as a renewal of the message of Lourdes.  Mary appeared in similar dress as she did at Lourdes, with a blue sash, and dedicated a spring of water to healing.  Unlike Lourdes, the spring of water already existed, and was not ‘miraculously’ discovered.
Mary told Mariette that the spring was set apart for her (Mary), for all the nations, and for the sick.  Again, similar to Beauraing, Mary makes a bold claim in Banneux where she said, “I come to relieve the sick” and “I come to relieve suffering.”  Further, Mary told Mariette, “Have faith in me…I shall trust you…pray earnestly.”
The message of Banneux can console us in wake of what has happened in Belgium. The Belgian people are suffering right now in many ways. They are suffering from their decisions to contradict morality and a loss of faith but, even more so, they are presently suffering in the midst of turmoil and death caused by the recent attacks.  But Mary has come to relieve that suffering.  And it seems that the key to such relief would be doing what she asked Mariette to do: to pray earnestly and with endurance.
Mary’s message in Banneux is one of healing.  She wants people to experience this healing in their hearts.  Violence and strife causes wounds, such as anger and hatred, to fester within but Mary wants us to experience a great healing of these afflictions.  She wants us to have faith that all of this will pass, and God’s healing and peace will reign in our time.

Praying for Conversion and Peace

Our society has turned away from God in many ways. We mock the laws of God and give license to sin.  Now is the time for us to turn ourselves back to God.  Over and over again, Mary asks her children for conversion. Yes, that means the conversion of those who perform such hateful acts as we witnessed in the new reports, but it also means our conversion.  There is an absence of peace in our world and in our hearts.  In these tumultuous times, it behooves us to listen to what Mary said back in 1932 and 1933 to six children. Even in Belgium, Mary’s words of motherly concern never grow old.
Pray for peace in the world.  Pray for the conversion of sinners.  Pray for healing.  The best way to do this, if you ask me, is to pray the rosary.  That’s what Mary asked in 1917 at Fatima and it seems to be a prayer which pleases God.
Mary, Mother of God, the Immaculate Virgin, Queen of Heaven, pray for our world.  Grant us, what we ask, the grace of conversion and healing.
Our Lady of Beauraing, Pray for Belgium. Pray for us.
Our Lady of Banneux, Pray for Belgium. Pray for us.
Posted by Padre Steve at 5:00 PM

Thank you for this post. I also posted about Beauraing and Banneux yesterday: http://bangortobobbio.blogspot.com/2016/03/our-lady-of-beauraing-our-lady-of.html