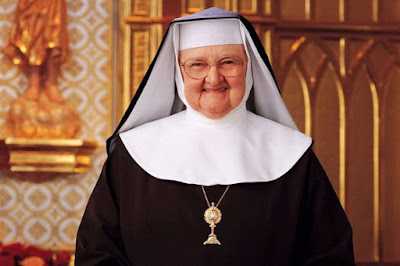 The following comes from the Catholic Sentinel:

Mother Mary Angelica of the Annunciation, 92, the Poor Clare nun who founded the Eternal Word Television Network (EWTN), passed away on March 27 after a lengthy illness. She had suffered a stroke several months ago.


“Mother has always and will always personify EWTN, the network that God asked her to found,” said EWTN Chairman and Chief Executive Officer Michael Warsaw. “Her accomplishments and legacies in evangelization throughout the world are nothing short of miraculous and can only be attributed to divine Providence and her unwavering faithfulness to Our Lord.”

Members of her religious order, the Poor Clares of Perpetual Adoration at Our Lady of Angels Monastery in Hanceville, have been requesting — and thanking the world — for prayers for Mother Angelica.

"The many cards and promises of prayer she received throughout this past Christmas season were a great consolation and support," the posting said. "Mother's condition remains delicate and she receives devoted care day and night by her sisters and nurses."

"In God's providence, she was able to receive the special jubilee grace" of passing through the Door of Mercy shortly after its opening for the Jubilee Year of Mercy, it said. "Although she is most often sleeping, from time to time mother will give a radiant smile. There is no doubt that her heart must be 'on things above.'"

Last November, a spokesman for the Poor Clares told Catholic News Service, that Mother Angelica was doing as well as could be expected for someone her age who remains partially paralyzed.
"From what I'm told, it's not that she's completely unable to eat. It's assisting her to get the nutrients she needs," said Luke Johnasen, director of pilgrimages at the monastery. He confirmed to CNS that she had been fitted with a feeding tube.

"She's had some up and downs the last few months," he said. "She's a fighter."

In a website posting, the Poor Clares said that toward the close of 2015, the entire community of the Franciscan Missionaries of the Eternal Word, based in Birmingham, came together to celebrate a special Mass for Mother Angelica. It was "another gift of God's mercy. Mother herself is regularly fortified by the sacraments," the order said.

On Feb. 12, Pope Francis sent his greetings Mother Angelica from aboard the papal plane to Cuba for his historic meeting with Russian Orthodox Patriarch Kirill of Moscow.

A native of Canton, Ohio, Mother Angelica launched EWTN Aug. 15, 1981. The initiative was met with doubt from television executives who felt there was little demand for Catholic programming. The networks' website reports that it transmits programs 24 hours a day to more than 230 million homes in 144 countries via cable and other technologies. It broadcasts in in English and several other languages.

Twenty employees are now nearly 400. EWTN broadcasts terrestrial and shortwave radio around the world, operates a religious goods catalog and publishes the National Catholic Register and the Catholic News Agency.

Archbishop Chaput has served on EWTN’s board of governors since 1995. “She founded and grew a network that appealed to everyday Catholics, understood their needs and fed their spirits. She had a lot of help, obviously, but that was part of her genius.”
Posted by Padre Steve at 12:53 AM