Feast of St. Bartholomew the Apostle! 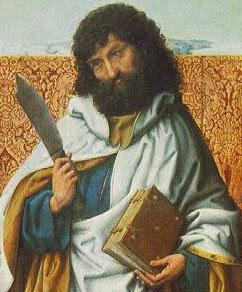 Today is the Feast of St. Bartholomew! The following comes from the Ecole Glossary.

Nathaniel Bar Tolmai was a native of Cana chosen to be among the 12 Apostles and praised for his sincerity. The synoptic gospels and the Acts of the Apostles list Bartholomew among the Twelve, and the gospel according to St. John lists Nathaniel, who is elsewhere associated with Philip. Other gospels note an association of Philip with Bartholomew, and people have inferred that the writers of the synoptic books call Nathaniel by his patronymic, while St. John calls him by his first name.

Details of his subsequent career are unknown. He is said to have preached in India (or Ethiopia), Mesopotamia, Persia, Egypt, and Armenia. Eusebius reports that St. Pantænus of Alexandria found in India (by which Eusebius may have meant Ethiopia) a copy of the Hebrew text of the gospel of Matthew that Bartholomew had left there. A gospel attributed to Bartholomew is apocryphal.

Nathaniel is thought to have been martyred by King Astyages of Babylon, who ordered him flayed and beheaded. The place of Nathaniel's death is uncertain. Some say it was Derbend on the Caspian Sea, but Armenian sources assert he died at Arbanoupolis in Armenia. St. Bartholomew in Rome claims his relics.

For more information on St. Bartholomew please check out the Patron Saints Index!
Posted by Padre Steve at 6:00 AM