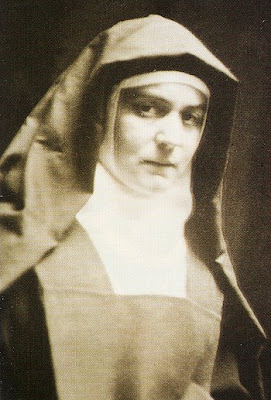 Today in the Catholic Church we remember Edith Stein (St. Teresa Benedicta of the Cross). The following comes from EWTN:Edith Stein, saintly Carmelite, profound philosopher and brilliant writer, had a great influence on the women of her time, and is having a growing influence in the intellectual and philosophical circles of today’s Germany and of the whole world. She is an inspiration to all Christians whose heritage is the Cross, and her life was offered for her own Jewish people in their sufferings and persecutions.

Born on October 12, 1891, of Jewish parents, Siegried Stein and Auguste Courant, in Breslau, Germany, Edith Stein from her earliest years showed a great aptitude for learning, and by the time of the outbreak of World War I, she had studied philology and philosophy at the universities of Breslau and Goettingen.

In the midst of all her studies, Edith Stein was searching not only for the truth, but for Truth itself and she found both in the Catholic Church, after reading the autobiography of Saint Teresa of Avila. She was baptized on New Year’s Day, 1922.

After her conversion, Edith spent her days teaching, lecturing, writing and translating, and she soon became known as a celebrated philosopher and author, but her own great longing was for the solitude and contemplation of Carmel, in which she could offer herself to God for her people. It was not until the Nazi persecution of the Jews brought her public activities and her influence in the Catholic world to a sudden close that her Benedictine spiritual director gave his approval to her entering the Discalced Carmelie Nuns’ cloistered community at Cologne-Lindenthal on 14 October 1933. The following April, Edith received the Habit of Carmel and the religious name of "Teresia Benedicta ac Cruce," and on Easter Sunday, 21 April 1935, she made her Profession of Vows.
To learn more please click here.
Posted by Padre Steve at 5:00 AM

It seems we both went to Apostleship of Prayer and Catholic Culture to get info on this amazing woman, LOL

Also, for the record I have never met personally the Cardinal, my sister and her ex husband, Jose Antonio Rodriguez, (now deceased)divorced in the mid '80's....other members of my immediate family have.

I think they do a good job on the short informative videos. Great minds think alike!