Saint of the Day: Bernard of Clairvaux 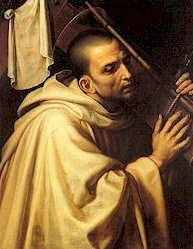 Today is the feast of St. Bernard of Clairvaux! a Cistercian and founder of the abbey at Clairvaux. The following is from the Ecole Glossary:

St. Bernard of Clairvaux (1090-1153 AD) was born into nobility in Burgundy, France and was educated at the school of secular canons in the town of Chatillon-sur-Seine. At the age of twenty-three, he entered the Cistercian abbey of Citeaux near Dijon. Bernard spent a short time at Citeaux before being asked to found the monastery of Clairvaux and become its abbot. His success at Clairvaux prompted Pope Innocent II to call on him to intervene in a conflict between Innocent and the antipope Anacletus in 1133 and 1137. Once again successful, Bernard was drawn further from the cloister into the public life of the Church. He spent the next fifteen years condemning heretics and instituting religious reform until 1147 when Pope Eugenius III asked him to organize the Second Crusade. He lived to see the crusade fail and died shortly thereafter in 1153 at Clairvaux. Bernard wrote many spiritual treatises, including the celebrated On Loving God.

You can read more about St. Bernard at the Patron Saints Index!