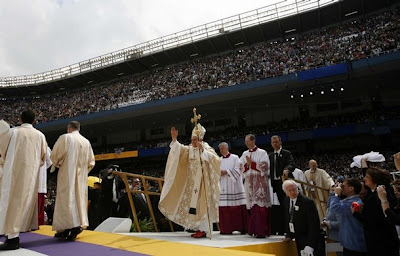 I had another wonderful day today! I felt so blessed to be able to concelebrate the Mass with the Holy Father... It was amazing to walk out of the visitors dugout at the stadium and see all those cheering people! Just amazing! Also, to see Yankee Stadium so beautifully prepared made it really all very special... I then realized how close I would be to the Pope during the entire mass (like I was on deep 3rd base and he was playing deep 2nd)! I kept imagining throwing to the Pope for a force out at second base! I was able to spend a good deal of time meeting and talking with many priests from New York and around the world! I actually spent a great deal of time talking to Fr. Andrew Apostoli, CFR. He is well known for books and programs on EWTN and he and I sat next to one another at the mass. We also got plenty of time waiting in line for security to chat! The Holy Father came very near to us as he exited the stadium. The secret service actually let him shake the hands of many priests in frot of me. If I was bolder I might have reached over a few and grabbed his hand myself, but I tried to be polite! I just stood and watched and tried to take the moment in as he passed! The entire visit was a grace and I know that the Church in our country will be blessed by it for years to come. It was just great being able to see the joy in the faces of so many other people (old, young, clerical and religious alike). The Holy Father was able to bring us all together and send us home energized to live our lives more like Christ! I will add a few of my own pictures tomorrow! Until then, God bless!
Posted by Padre Steve at 11:36 PM