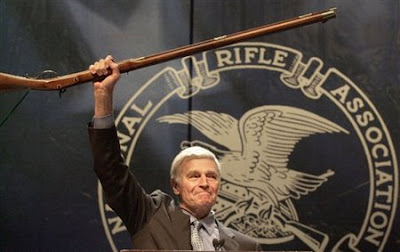 Charlton Heston (October 4, 1923 – April 5, 2008)was an Academy Award winning actor known for playing heroic roles, such as Moses in The Ten Commandments, Colonel George Taylor in Planet of the Apes and Judah Ben-Hur in Ben-Hur. Early in his career, he was one of a handful of Hollywood actors to speak out against racism and was active in the civil rights movement. He later became known for conservative politics and was president of the National Rifle Association from 1998 to 2003. In July 2003, he received the Presidential Medal of Freedom at the White House from President George W. Bush. "The largeness of character that comes across the screen has also been seen throughout his life," President Bush said at the time. In August 2002, Heston publicly announced he was diagnosed with symptoms consistent with Alzheimer's disease. Rest in peace Chuck!