Images of Our Lady in Ecuador

The following is a sample of the different devotions to Our Lady that are popular here in Quito. There are others as well, but these are the most well known. I will post later on Our Lady of Good Success. That is an interesting story as well! I found the information on Our Lady of Quinche at Catholicmedia.net. 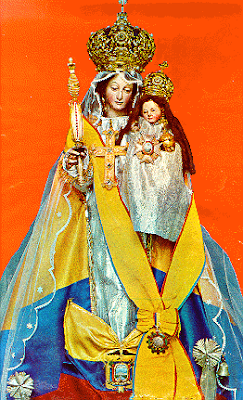 Our Lady of the Presentation of Quinche is a handsome wood sculpture carved in the 16th century by Don Diego de Robles, an extraordinary artist who is also credited with other popular and venerated images of Mary. History tells us that those who had ordered the image couldn't or wouldn't pay the sculptor for it, and he traded it to the "oyacachi" Indians for some large cedar boards he needed. At a later time, popular fancy enriched the facts with the legend that the Virgin had appeared earlier to the Indians in a cave and had promised to deliver them from the dangerous bears which devoured the children. The Indian chiefs were astonished when they saw Diego Robles arrive carrying the image of the Virgin, whom they recognized as having the same features as the Lady who had appeared to them in the cave and had spoken to them. The statue remained under the care of the Indians fifteen years, when the bishop of the place ordered it moved to the village of Quinche from which it finally took its name in 1604. The image is a fine carving in cedarwood, measuring 62 centimeters in height. The handsome sculpture is hidden by large brocade garments, covered with jewels and embroidered with gold and silver threads, which only allow the serene dark face to be seen. The Virgin holds a scepter in her right hand and with the left hand she holds the Child, who lifts a hand in blessing and in the other hand displays a gold globe crowned with a cross. The pedestal at her feet and the large half moon, both of pure silver, and the heavy crowns made of gold and precious stones which adorn the heads of Jesus and Mary, evidence the generosity of the people of Ecuador who like to see their patroness resplendent, dressed with the best finery. The face of the Child Jesus has features resembling those of the mestizo children of those mountains. Mestizo is also the color of the mother, synthesis of the Inca and Spanish souls. She has a delicate oval face with a slender nose, thin lips and a small mouth; her slanted eyes and her sad gaze with half closed eyelids give her a unique gentleness. This is why she is so popular in Ecuador, specially among the Indians who affectionately refer to their protector in heaven as "La Pequehita" (the little one). There are an amazing number of songs in honor of the Virgin of Quinche, in "Quechua," "Jibaro," and many other dialects of the region as well as in Spanish; many have been sung for 300 and even 400 years. The image was crowned in 1943 and her feast is celebrated each year on November 21. The present shrine was declared a National Sanctuary in 1985. 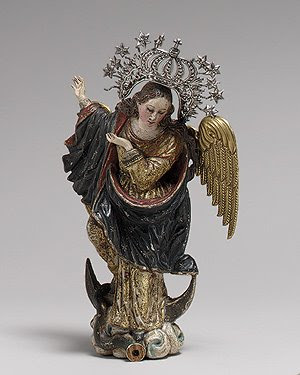 The Virgin of Quito is a popular cult image venerated throughout the northern Andes; its composition is derived from the biblical description of the "Woman of the Apocalypse." As described by Saint John, the woman was clothed in the sun, with the moon under her feet and a crown of twelve stars on her head. After battling a dragon (Satan, with the apple of original sin in its mouth, missing from this object), she is given wings to escape. This small devotional image is one of a multitude to replicate the famed sculpture in the Church of San Francisco in Quito, attributed to the mestizo sculptor Legarda. This image is also seen overlooking the city of Quito and is beautifully lit at night. You can find out more about El Panacillo here. 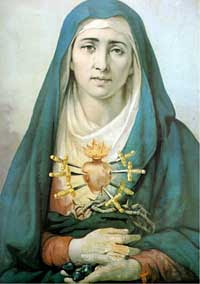 The picture of Our Lady of Quito, an image of Our Lady with the seven swords piercing her heart, was first placed in the boarding school of the Jesuit Fathers in Quito. On April 20, 1906, Father Andrew Roesch along with thirty-six boys of the academy witnessed the first miracle of this famous picture of Our Lady of Sorrows; while in the refectory they saw the Blessed Mother slowly open and shut her eyes. The same miracle occurred several times after this, once more in front of the boys at the school, but this time in the chapel, to which the picture had been taken. Subsequently the canonical process of examination was carried out by the ecclesiastical authorities, and the Vicar General ordered the picture to be transferred in procession from the College to the Church of the Jesuit Fathers. At the church the prodigy was repeated several times before the crowds gathered there, and many conversions took place. Again and again, the wonder repeated itself, at one time for three consecutive days. The image was also said to have shed tears on April 29, 1906. You can find out more on this by clicking here.
Posted by Padre Steve at 6:10 AM

Padre, thank you for explaining about Our Lady of Quinche (sp?). On Saturdays in NJ we attend Mass in the Chapel of St. Stephen's Church. It is decorated with lots of images of our Lady. I didn't know anything about OLOQ until I read your post. Interesting that our Blessed Mother appeared as one of the indigenous people in Ecuador as she did as OLOG.

Yes, I think it is wonderful and I am sure that has drawn out more devotion from the local people as a result.

I have a beautiful santos of Our Lady of Quito - very similar to the image you show. Thanks for posting this.