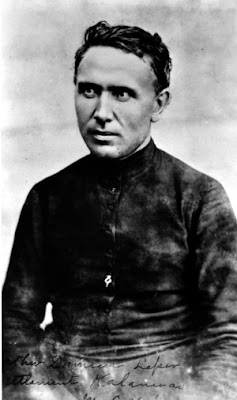 The following comes from the Catholic News Service:

The Vatican announced that final approval would be given Feb. 21 for the canonization of Blessed Damien de Veuster, a Belgian-born missionary priest who served patients with Hansen's disease on the Hawaiian island of Molokai more than a century ago.

Pope Benedict XVI authorized the publication of a decree recognizing a miracle attributed to the intercession of Blessed Damien last July, clearing the way for his canonization.

The Vatican said Feb. 16 that an "ordinary public consistory" -- a meeting of the pope with cardinals resident in Rome and invited bishops and other dignitaries -- would be held Feb. 21 to finalize the approval of 10 canonizations, including Blessed Damien's.

The dates for the canonization ceremonies are expected to be announced shortly after the consistory.

Blessed Damien was a 19th-century missionary, a member of the Congregation of the Sacred Hearts of Jesus and Mary. Born in 1840, he spent the last 16 years of his life caring for patients with Hansen's disease, or leprosy, on Molokai.

The miracle attributed to Blessed Damien involves the 1999 healing of Audrey Horner Toguchi, a Hawaiian who had been diagnosed with cancer. She had a tumor and other tissue removed and underwent radiation; when new tumors were found on her lungs, she decided to pray to Blessed Damien instead of undergoing the chemotherapy her doctors recommended. The lung tumors gradually shrunk and disappeared altogether.

Cardinal Lozano, president of the Pontifical Council for Health Care Ministry, said the soon-to-be saint is "the symbol of all those consecrated to Christ with religious vows who still today dedicate their lives to such people" as those struck with Hansen's disease.
Posted by Padre Steve at 4:01 PM

You can learn a bit more about Damien de Veuster of Molokai at: www.philomena.org/damien.asp