A miracle for John Paul from John Paul?

The Deacon's Bench is a fantastic blog with lots of good information and well written stories! Deacon Greg has this latest on the possible miracle for Pope John Paul II! I really pray this miracle helps move his Beatification forward. Baby John Paul may have been the beneficiary of a miracle from his holy namesake! Here is the full story from CNA:
Tracy and Tami Hauser are praying for a miracle and asking others to do the same. On Oct. 8, their seventh child, John Paul, was born with a rare chromosomal disorder called Trisomy 13, which doctors consider incompatible with life. Despite the bleak diagnosis, the Hausers are praying for their son's healing through the intercession of the late Pope John Paul II, their son's namesake.
The Omaha couple wants to spread a devotion to the late Pope's beatification and canonization prayer in hopes that he will intercede for them and grant them one of the three miracles needed for his canonization."Every day is a miracle and even if John Paul should end up dying and going to heaven, it's still a great thing for this devotion for Pope John Paul to be spread," Tami Hauser said. "I am confident and believe that he loves this baby and will intercede for us. I have just felt compelled to spread this devotion to him."The couple, whose children range in age from 21 years to 12 weeks, said their goal is to get 1,000 people praying the beatification prayer daily with them.They have already distributed nearly 400 prayer cards within their parish community at St. Margaret Mary Church, as well as to their neighbors, family and friends. They even dropped off a few prayer cards to the chancery.In response, the family has received prepared meals and letters telling of prayers for their son, including one from Omaha Archbishop Elden Francis Curtiss."I was praying last night on how to get more people praying with us and it occurred to me that Pope John Paul II really believed in utilizing the media to spread devotion, and that I should contact the Catholic Voice to help me spread a devotion to this prayer and cause," Tami Hauser said. "It must be the Holy Spirit." The Catholic Voice is the newspaper for the Archdiocese of Omaha. 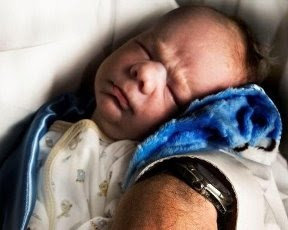 Already John Paul has experienced small miracles.Most children born with the disease die before birth and the few that survive usually do not come home from the hospital, Tami Hauser said. The ones who do come home have a 50 percent chance of dying within the first six months of life and 91 percent chance of dying within the first year, she said.John Paul already has overcome two episodes where he stopped breathing and recovered on his own, and he has no external or internal malformations, she said. Many babies born with Trisomy 13, which occurs when extra DNA from chromosome 13 appears in some or all of the body's cells, have multiple abnormalities.His breathing seems to have improved and strengthened with time, Tami Hauser said. He has hit his developmental goals so far, and he can hear and see. Last week he smiled at his grandmother, she said.The couple found out about John Paul's illness six months into the pregnancy."I named him John Paul because I loved Pope John Paul and I just knew that's what I should name him after I found out about this," Tami Hauser said. "I really didn't think we were going to bring him home so I thought, 'Wouldn't that be a good person to look out for him in heaven?'"She said John Paul's situation is a perfect opportunity for a miracle."There are so many people who are interested in him in our community and praying for him already that he could just have a big impact if he was able to overcome this. He really has the ability to reflect the Lord's glory," she said. "When you have a diagnosis that's so bleak, there's just no medically explaining it away."Tami Hauser said John Paul's life has strengthened her family's faith and has brought great blessings."Every day really is a miracle," she said. "I just look for little things every day to rejoice in."
The Beatification Prayer:
O Blessed Trinity, we thank you for having graced the church with Pope John Paul II and for allowing the tenderness of your fatherly care, the glory of the cross of Christ, and the splendor of the Holy Spirit, to shine through him. Trusting fully in your infinite mercy and in the maternal intercession of Mary, he has given us a living image of Jesus the Good Shepherd, and has shown us that holiness is the necessary measure of ordinary Christian life and is the way of achieving eternal communion with you. Grant us, by his intercession, and according to your will, the graces we implore, hoping that he will soon be numbered among your saints. Amen. John Paul II, intercede for us!
Posted by Padre Steve at 1:48 PM