Faith and the Super Bowl! 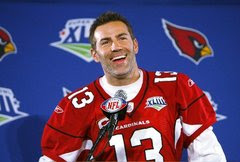 I found the following article from National Post to be very cool! I am going to enjoy the Super Bowl this year and am ok with both teams... no team to really route against this year! Go Saints Go!

This was not the Super Bowl. It was not even the Grey Cup championship game. It was a Hamilton Tiger-Cats training camp in 1985, and Steve Kearns, a Canadian receiver with modest skills and an unwavering faith in God, was wrestling with some inner demons. Football was what he wanted to do. He did not want to get cut by Hamilton. He did not want to see his CFL dream come to an end.

But the son of Christian missionaries was not afraid of disappointment, because for him, failing to make the team would not really be a failure at all. The good book had taught him that all God wanted was for him to do his best, and so that is exactly what he did.

"It is kind of cliche, but for me my faith gave me the freedom to go out and play hard, and do the best I could, and that ultimately, I was responsible to God, and so even if I got released, it was OK," Mr. Kearns says, and begins to laugh. "And I did get released, probably about two weeks later. But I just had this peace. It's hard for me to explain."

Mr. Kearns' football career was over, but the born-again Christian's life mission was about to begin, and within a few years, he was ministering to the players' spiritual needs as team chaplain. Tomorrow, the former-player-turned-pastor will join millions of believers and non-believers alike in watching the Pittsburgh Steelers and Arizona Cardinals play Super Bowl XLIII in Tampa, Fla.

The Cardinals' star is quarterback Kurt Warner, an evangelical who mentions God in almost every interview and is often seen with a Bible in hand. Mr. Warner, a rags-to-riches character, was bagging groceries before his NFL career began. He conducts weekly Bible-study sessions during the season, and as many as 20 of his teammates attend.

Pittsburgh has Troy Polamalu, an All-Pro safety with flowing black hair and a reputation for delivering savage hits on enemy players. Mr. Polamalu is an Eastern Orthodox Christian. His voice is little more than a whisper, when he actually speaks. "I feel like faith is the foundation of everything I do on and off the field," he said this week in Tampa. "It determines how you live your life when you love God." 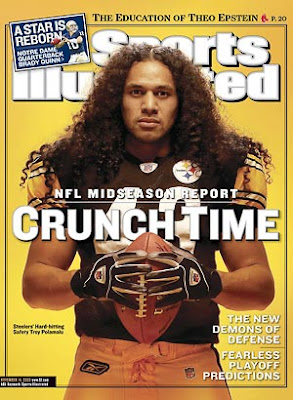 God, it seems, is everywhere at the Super Bowl: in the players' words, in the Bible Mr. Warner carries, in the athlete prayer circles commonplace at NFL games, and on the giant "Super Bowl Champion is Jesus" banner that a retired Tampa pastor has hired a plane to pull across the Florida skies later today.

But what about God? Will He be paying attention to the big game, and does He care who wins? And what about Mr. Warner's in-your-face brand of faith, versus Mr. Polamalu's quiet devotion? Does it count once the game begins, and does a religious player have the edge over a less devout opponent when it matters most?

"I don't think a player's faith is going to make him jump any higher, or run any faster, but hopefully, it will give him an attitude of unselfishness," pastor Kearns says. "Faith gives you more of a freedom to do the best you can, and to be satisfied with it --even if you lose."

Kerry Joseph finds "peace of mind" through his faith. The Toronto Argonauts starting quarterback points to the heavens every time he throws a touchdown pass. It is his way of giving thanks. Mr. Joseph has scripture inscribed on his practice towels, and before each season he chooses a different biblical verse. Last year, it was Jeremiah 29, 11-13: "For I know the plans I have for you," declares the Lord. "Plans to prosper you and not harm you, plans to give you hope and a future ..."

Mr. Joseph was traded to Toronto from Saskatchewan in March, 2008, and was troubled by the move to the Argos, who already had a quarterback, in Michael Bishop. Controversy ensued. Toronto had a miserable season. Mr. Joseph struggled on the field. But those words -- about the Lord having a plan -- helped. His faith helped. It had before.

Mr. Joseph played against Kurt Warner in college and, in a story not completely dissimilar from Mr. Warner's rise from grocery-bagger to NFL star, the Argo pivot was out of an NFL job and playing flag football in his home state of Louisiana when the Ottawa Renegades called in 2003. The NFL cast-off eventually found his way to Saskatchewan in 2006, and won a Grey Cup and the CFL's most outstanding player award with the Roughriders in 2007.

More than 50% of the population in Southern states such as Louisiana -- where Mr. Joseph was raised a southern Baptist --attend religious services at least once a week, according to the Pew Research Center. Football is the South's secular religion. College programs churn out NFL players, and 35-40% of them identify as evangelical Christians, who pray regularly.

In Canada, there are no prayer circles after a good old hockey game. But in the United States, a football player bowing his head is part of the sport's pageantry.

"I am not so sure ice hockey players want to kneel on the ice, as though it is some kind of Dante's icy districts of hell," Dr. Joe Price says with a delighted cackle. Professor Price teaches religious studies at Whittier College in California. He is an ordained Baptist minister, a football fan and has written extensively on the subject of athletes and faith.

For him, the Super Bowl is a spectacular quasi-religious festival, a giant Sunday Mass that, like Christmas and Easter, only comes around once a year. Devout and lay football fans watching this year's service in Tampa will bear witness to an ecstatic celebration of American free enterprise. Beer, razor blades, potato chips and babes in bikinis will be featured in slickly produced 30-second television commercials, which sell for US$3-million a pop, and encourage the faithful consumer to spend.

At halftime, Bruce Springsteen, an ageing rocker, who was born in the U. S. A., will sing some hits and pay tribute to another sacred American cow: the entertainment industry. After halftime, there will be more football, and more athletic feats by prayerful player-warriors who earn an emperors' wage and walk the American landscape like demigods.

And when it is over, and a winner decided, the star performer will be selected as the game's most valuable player. Super Bowl ritual calls for the MVP to utter the famous commercial verse -- "I am going to Disneyland" -- before dashing to the locker room and the sweet hereafter reserved for NFL heroes.

Should Arizona triumph and Mr. Warner, the Bible-toting quarterback, get the MVP nod, what might he say? Will Mickey Mouse take a back seat to Jesus Christ? And will God be listening?

"If God does care about football, then God probably cares more about the Super Bowl losers, because God is usually on the side of those who are suffering," says professor Price. "Rather than caring about who wins, God befriends those who lose."
Posted by Padre Steve at 8:24 AM