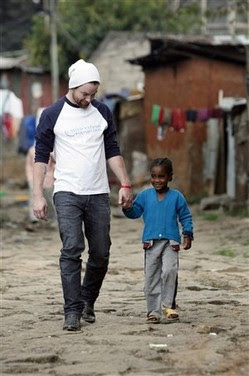 This is Vocations Sunday and a good time for all of us to renew our passion of inviting and working for vocations! Deacon Greg does a beautiful job with his homily this Sunday and speaks well of our call to foster vocations:

Wednesday night, I was home flipping through the channels on TV. I caught part of "American Idol" and I heard something remarkable - and it had nothing to do with music.

It was their annual "Idol Gives Back" charity show, when they raise money for different charities around the world. And throughout the program, they showed some film clips of these donations in action - where the money goes, and the good that it is able to do.

At one point, David Cook, an "American Idol" winner from a couple years back, took a trip to Ethiopia. Cook visited a girls school - one of the charities being helped by the TV show. These were beautiful young girls, six or seven years old. And as the camera showed them, you heard their voices declaring what they wanted to be when they grew up - all the possibilities that now lay before them. "I want to be a doctor." "I want to be a teacher." And on and on, and then one of them said, very happily: "I want to be a nun."

It was so matter-of-fact, and so unexpected. I was startled - and moved. When was the last time a little girl in America said something like that?

But it was a reminder: God is still calling. As Jesus says in the gospel today: "My sheep hear my voice. I know them, and they follow me."

The shepherd is calling. But are we listening?

This is Good Shepherd Sunday, and it's also World Day of Prayer for Vocations. It is an opportunity not only to pray for vocations - but also to work for them.

Last week, a research group at Georgetown University published the results of a survey of all the men - all 440 of them -- who will be ordained in this country in June: the ordination class of 2010. There are some interesting statistics.

Nearly a third of them were born outside the United States.

92% of them had some sort of full-time job before entering the seminary.

But then there is this: of those about to be ordained, a majority -- 63% -- said they were discouraged from becoming a priest by a friend or a classmate.

Fully half - 50% -- said they were discouraged by a parent or family member.

If you want to know why more men don't decide to become priests, there is one answer. And it is an indictment of all of us. The fact is: too many of us are not encouraging vocations. If this survey is accurate, a lot of us are actively working against them, trying to turn people away from religious life.

Which means we are not only failing to support vocations in others. We are also failing in our own vocations as Catholic Christians.

Whether we realize it or not, each of us has a vocation - not just those of us who are ordained, or who wear a habit, or who work in some form of ministry. God has called every single person in this church. Young, old, single, married. He has called us to be the Body of Christ - his hands, his arms, his heart, his voice.

But how do we do that if we discourage those who may feel called to serve God?

How do we do that if we tell our sons and daughters, our friends and neighbors, those we love the most: "Don't"? We should be telling every one of them, "Do! Do listen to that quiet voice. Do offer to give your life to God and His Church. Do this great, beautiful, sacrificial, wonderful thing."

I know, to many Catholics right now, a religious vocation doesn't seem like a wonderful thing. Last week, John Quinn, the Archbishop Emeritus of San Francisco, spoke to a gathering of priests in Houston. He talked about how difficult it is to be a priest today - especially at this dark hour in the church. But he celebrated the joy and heroism and hope of this vocation - good priests doing great work. He told the story of a talented priest he knew named Jack Isaacs. Archbishop Quinn wanted to send him to Rome to study, but Fr. Jack said no. He wanted just to work in a parish. He felt drawn, especially, to the poor. He worked in places without electricity, churches that didn't even have a rectory. Once, the bishop told him they'd get a condominium for him, but Fr. Jack said no, he'd just live in a simple room adjoining the sacristy. He wanted to live like the people he served. At the age of 50 he was diagnosed with cancer. The bishop visited his mother the day before Fr. Jack died and said, very simply, "You are the mother of a saint." Archbishop Quinn concluded: "Jack Isaacs was an American priest."

There are thousands like him. And there are more stories like that waiting to be told, waiting to be lived. How many more future Jack Isaacs are out here, wanting to serve God and His church? How many little girls like that one in Ethiopia dream of a life of holiness and helping others? How many of them might be listening for God's call - but hearing, instead, someone they know and love saying, "No. Don't."

This is a moment when we can begin to change that. This Good Shepherd Sunday, each of us can be a shepherd - maybe to someone we know -- guiding and encouraging another person's vocation, their journey to God.

If we took that as our special calling, maybe stories like the one of that little girl in Ethiopia wouldn't be so rare.

And maybe, a world that has made it a habit of telling God "No"... might finally, joyfully begin to say "Yes."
Posted by Padre Steve at 8:56 AM