Saint of the day: Pope Martin I 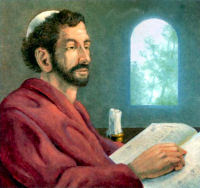 The saint of the day is Pope St. Martin I. Hat tip to Catholic Fire:

Martin I lay too sick to fight on a couch in front of the altar when the soldiers burst into the Lateran basilica. He had come to the church when he heard the soldiers had landed. But the thought of kidnapping a sick pope from the house of God didn't stop the soldiers from grabbing him and hustling him down to their ship.


Elected pope in 649, Martin I had gotten in trouble for refusing to condone silence in the face of wrong. At that time there existed a popular heresy that held that Christ didn't have a human will, only a divine will. The emperor had issued an edict that didn't support Monothelism (as it was known) directly, but simply commanded that no one could discuss Jesus' will at all.


Monothelism was condemned at a council convened by Martin I. The council affirmed, once again, that since Jesus had two natures, human and divine, he had two wills, human and divine. The council then went further and condemned Constans edict to avoid discussion stating, "The Lord commanded us to shun evil and do good, but not to reject the good with the evil."


In his anger at this slap in the face, the emperor sent his soldiers to Rome to bring the pope to him. When Martin I arrived in Constantinople after a long voyage he was immediately put into prison. There he spent three months in a filthy, freezing cell while he suffered from dysentery. He was not allowed to wash and given the most disgusting food. After he was condemned for treason without being allowed to speak in his defense he was imprisoned for another three months.


From there he was exiled to the Crimea where he suffered from the famine of the land as well as the roughness of the land and its people. But hardest to take was the fact that the pope found himself friendless. His letters tell how his own church had deserted him and his friends had forgotten him. They wouldn't even send him oil or corn to live off of.


He died two years later in exile in the year 656, a martyr who stood up for the right of the Church to establish doctrine even in the face of imperial power.

For more on this holy saint please click here.