Pope Benedict: Before attacks of the world, penance is a necessary grace 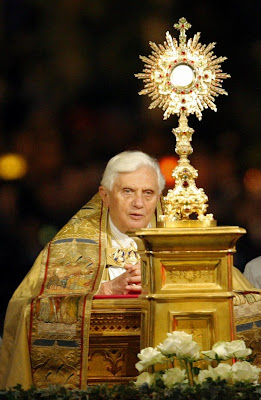 "We must obey God instead of men," said the Holy Father in a memorable address to members of the Pontifical Biblical Commission at Mass on Thursday. During the course of the homily he also spoke of the "attacks of the world," a phrase that was interpreted by some news reports as the recent sex abuse scandals. Pope Benedict said that Catholics must respond to attacks by doing acts of penance.

"Obedience to God has primacy," Pope Benedict XVI began his homily, which he delivered without prepared remarks. The Holy Father told members of the commission gathered in the Pauline Chapel for a Mass to mark the beginning of the Biblical Commission's full assembly on Thursday morning.

Obedience to God makes us free, he said, while the the idea of being "free, autonomous and nothing else," and supposedly free from obedience to God "is a lie."

The Holy Father also warned that if the majority consensus prevails and becomes the dominant power in a society, it can also be "a consensus of evil." In this way, we can see that "so-called autonomy doesn't free man," he pointed out.

This was the ideology of the Nazi and Marxist dictatorships, he noted, saying the while we are fortunate that they no longer exist, mankind still lives with dictatorships in more subtle forms, such as in conformism. The obligation "to think like everyone thinks, act like everyone acts, and the subtle aggression against the Church, or also less subtle, demonstrate how this conformism can truly be a real dictatorship," the Pope said.

Pope Benedict went on to stress in his homily that for Christians, obedience to God means really knowing Him and wanting to follow his will, and not a question of using Him as a pretext for our own desires.

The Pope applied this practically to the Christian fear of speaking of eternal life. "We speak of the things that are useful for the world, we show that Christianity helps also to improve the world, but that its goal is eternal life and that from the goal might come the criteria of life, we don't dare say it."

We must also work on our avoidance of the word "penance," he explained, noting that the word may seem too strong to Christians in recent times, but that it is through the grace of penance that we recognize our sin, a need for renewal, change and transformation.

"Now," he emphasized, likely alluding to the media accusations against him in the past weeks, "under the attacks of the world that speak to us of our sins, we see that being able to do penance is a grace and we see how it is necessary to do penance, recognize that which is mistaken in our life."

The Pope delivered his homily on the first day of the the Commission's plenary assembly, which will run for five days and be based on the theme "Inspiration and Truth in the Bible."
Posted by Padre Steve at 5:00 AM