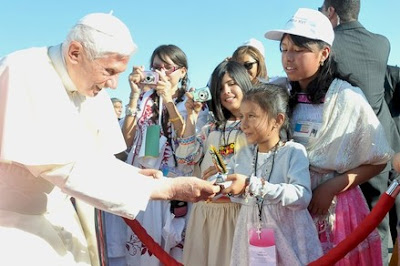 The following comes from the CBS News site:
It had become tradition in Mexico. Before daybreak, youths would creep as close as security permitted and serenade their beloved Pope John Paul II with a song of greeting and celebration.
Now a new, less familiar pope had come, seeking to strengthen his own ties with the largest Spanish-speaking Catholic nation.
So well before dawn Saturday, two dozen youths from a Guadalajara church group gathered near the school where the Pope Benedict XVI was staying. "We sang with all our heart and all our force," said Maria Fernanda de Luna, a member of the group. "It gave us goosebumps to sing 'Las Mananitas' for him."
Songs, joyful throngs, church bells and confetti welcomed Benedict as he began his first trip to Mexico, a celebration that seemed to erupt spontaneously out of what had been a thin, sun-dazed crowd.
As Pope Benedict XVI's plane appeared in the shimmering heat of Friday afternoon, people poured from their homes. They packed sidewalks five and six deep, screaming ecstatically as the pope passed, waving slowly. Some burst into tears.
Many had said moments earlier that they could never love a pope as strongly as Benedict's predecessor, John Paul II. But the presence of a pope on Mexican soil touched a chord of overwhelming respect and adoration for the papacy itself, the personification for many of the Catholic Church, and God. Thousands found themselves taken aback by their own emotions.
As a girl, Celia del Rosario Escobar, 42, saw John Paul II on one of his five trips to Mexico, which brought him near-universal adoration.
"I was 12 and it's an experience that still makes a deep impression on me," she said. "I thought this would be different, but, no, the experience is the same."
"I can't speak," she murmured, pressing her hands to her chest and starting to cry.

Pope Benedict XVI celebrates a Mass in Colegio di Miraflores in Leon, Mexico, Saturday, March 24, 2012.
(Credit: AP Photo/Osservatore Romano)
Belief in the goodness and power of the pope runs deep in Guanajuato, the most observantly Catholic state in Mexico, a place of deep social conservatism and the wellspring of an armed uprising against harsh anti-clerical laws in the 1920s. Some in the crowd came for literal healing, a blessing from the pope's passage that would cure illness, or bring them more work. Others sought inspiration, rejuvenation of their faith, energy to be a better parent.
Many said the pope's message of peace and unity would help heal their country, traumatized by the deaths of more than 47,000 people in a drug war that has escalated during a government offensive against cartels that began more than five years ago.
In a speech on the airport tarmac shortly after arriving, Benedict said he was praying for all in need, "particularly those who suffer because of old and new rivalries, resentments and all forms of violence."
He said he had come to Mexico as a pilgrim of hope, to encourage Mexicans to "transform the present structures and events which are less than satisfactory and seem immovable or insurmountable while also helping those who do not see meaning or a future in life."
For the rest of the story click here.
Posted by Padre Steve at 12:14 AM