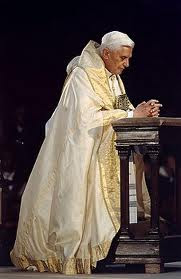 The constant noise that accompanies modern life is an enemy of God’s word being heard in prayer, Pope Benedict XVI said.


“Interior and exterior silence are necessary in order to hear that Word,” and yet, “our age does not, in fact, favor reflection and contemplation,” the Pope said March 7. On the contrary, “it seems that people are afraid to detach themselves, even for an instant, from the spate of words and images which mark and fill our days.”


The Pope was addressing over 10,000 pilgrims who gathered in St. Peter’s Square for his Wednesday general audience. This was the first audience of the year held in the open air. It was also the last in the Pope’s series of catecheses on the personal prayer of Jesus.


Today, his particular focus was on Christ’s silence on the cross, as well as the need for silence in our own prayer.


Throughout the Gospels, Jesus is repeatedly “withdrawing alone to a place far from the crowds, even from his own disciples, where he can pray in silence,” he observed.


The “great patristic tradition,” the Pope said, also teaches Christians that “the mysteries of Christ are linked to silence, and only in silence can the Word find a place to dwell within us.”


He then explained to the pilgrims that this “principle” of silence “holds true for individual prayer” and for Catholic liturgies, which, “to facilitate authentic listening, must also be rich in moments of silence and of non verbal acceptance.”


Silence has “the capacity to open a space in our inner being, a space in which God can dwell, which can ensure that his word remains within us, and that love for him is rooted in our minds and hearts, and animates our lives,” taught the Pope.


Even when people feel “a sense of abandonment” in the silence of prayer, and they worry that “God does not listen and does not respond,” Pope Benedict said that they should be reassured that “this silence, as happened to Jesus, does not signify absence.”


“Christians know that the Lord is present and listens,” the Pope assured, “even in moments of darkness and pain, of rejection and solitude.”


This is why the prayer of Jesus, as recounted in the Gospels, “is a reminder that we need to stop, to experience moments of intimacy with God, ‘detaching ourselves’ from the turmoil of daily life in order to listen.” In doing so, we return “to the ‘root’ which nourishes and sustains our existence.”


Pope Benedict then quoted from the Catechism of the Catholic Church as he reflected on Jesus’ silent prayer reaching its apex during his passion and death on Golgotha.


During that time of suffering, when “his cry to the Father from the cross encapsulated ‘all the troubles, for all time, of humanity enslaved by sin and death, all the petitions and intercessions of salvation history are summed up in this cry of the incarnate Word,’” he said.


“Here the Father accepts them and, beyond all hope, answers them by raising his son,” he concluded. “Thus is fulfilled and brought to completion the drama of prayer in the economy of creation and salvation.”


Pope Benedict then addressed the pilgrims in various languages before leading them in the singing of the Our Father in Latin and imparting his apostolic blessing.
Posted by Padre Steve at 3:16 PM