Pope Benedict: Listen to Jesus’ voice in the desert of Lent 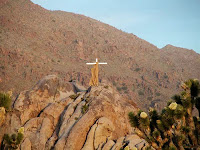 Pope Benedict XVI encouraged Christians to walk with Jesus across the desert of Lent, to “listen more closely to the voice of God, and to unmask the temptations that speak within each of us.”

Before praying the traditional Sunday Angelus prayer at noon, Pope Benedict offered those pilgrims gathered in St. Peter’s Square a reflection on how Lent is a “journey with Jesus through the desert.”

“On the horizon of the desert looms the Cross,” he said. “Jesus knows that it is the culmination of his mission: in fact, the Cross of Christ is the height of love, which gives us salvation.

“He himself says in today's Gospel: ‘As Moses lifted up the serpent in the wilderness, so must the Son of man be lifted up, that whoever believes in him may have eternal life,’” the Pope recalled.

He based his words on the Gospel reading from St. John for the fourth Sunday of Lent, a day that is popularly known as Laetare (Rejoice) Sunday, which marks the halfway point of the penitential season.

The Pope explained that in a similar way to how the Jews were healed from poisonous snake bites in the wilderness when they looked at the bronze serpent Moses created, so too are Christians healed of their sins by gazing upon Christ on the cross.

“Jesus will be lifted upon the Cross,” he said, “that whoever is in danger of death because of sin, turning in faith to Him who died for us, is saved. For God -- St. John writes – ‘did not send his Son into the world to condemn the world, but that the world might be saved through him.’”

The Pope brought his remarks to a close by looking ahead to the March 19 Solemnity of St. Joseph, after whom he is named, and his upcoming March 23-29 trip to Mexico and Cuba.

“Dear friends, tomorrow we celebrate the feast of St. Joseph. I sincerely thank all those who have remembered me in prayer in the days before my name day. In particular, I ask you to pray for the apostolic trip to Mexico and Cuba that I will begin next Friday.”

He entrusted the trip to the intercession of the Blessed Virgin Mary, who is “so loved and revered in these two countries that I am going to visit.”

After praying the Angelus, Pope Benedict offered greetings in multiple languages to those present. He urged English-speaking pilgrims to keep their eyes fixed upon the goal of Lent, “when we will accompany our Lord on the path to Calvary, so as to rise with him to new life.”
Posted by Padre Steve at 1:18 PM