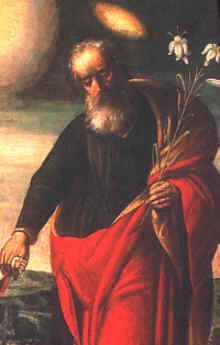 
March is the month of St. Joseph, whose feast the Church will celebrate Monday. Currently the holy patron of Vatican II is now seen as the “Father of the New Evangelization” and “the holy patron of the third millennium,” according to an  initiative launched by the bishop of the French diocese of Frejus-Toulon, Bishop Dominique Rey
On Saturday, the Diocese of Frejus-Toulon will be consecrated to Saint Joseph.
Saint Joseph had a special role in the preparation of Vatican Council II, given that Pope John XXIII chose him as a protector of the event, with his Apostolic Letter of March 19, 1961. In the text, Blessed John XXIII mentions “the voices that come to Us from all points of the earth” and the documents on Saint Joseph of his predecessors, from Pius IX to Pius XIII. In his document, the Pope proposed, in addition, that on March 19, Saint Joseph’s altar in the Vatican Basilica “be clothed in new splendor, wider and more solemn” to become a “point of attraction and religious piety for individual souls, for innumerable crowds.”
Then, in October of 1962, he made a gift of his papal ring to Joseph, offering it to the Polish shrine of Kalisz, where a painting of Saint Joseph is kept, which is considered miraculous.
It was Blessed John XXIII, moreover, who had Saint Joseph’s name inserted in the Canon of the Mass, as he announced in his address at the closing of the first session of the Council on Dec. 8, 1962.
The Shrine at Knock
John Paul II in turn gave his ring to Saint Joseph, to whom he had also been devoted since his childhood. The ring was placed by Cardinal Franciszek Macharski, archbishop of Krakow, in the church of Carmel, a shrine dedicated to Saint Joseph, on March 19, 2004.
The Polish Pope recalled the importance of Saint Joseph for the life of the Church in his Apostolic Exhortation Redemptoris Custos (August 15, 1989), a century after Pope Leo XIII’s encyclical Quanquam Pluries (August 15, 1889) on devotion to Saint Joseph.
For his part, Benedict XVI announced recently a Year of Faith, starting on the 50th anniversary of Vatican II. On many occasions, Benedict XVI has invited Catholics to learn from the school of Saint Joseph, to have a “spiritual conversation” with him, linked to a renewal of faith. Before the Angelus on December 18, 2005, for example, he said: “It is therefore particularly appropriate in the days that precede Christmas to establish a sort of spiritual conversation with St Joseph, so that he may help us live to the full this great mystery of faith.”
On March 18, 2009, in Yaounde, Cameroon, the Pope dedicated his homily to his patron saint. Addressing all the people of God, he concluded saying that in Saint Joseph there is no separation between faith and action.
“Dear brothers and sisters, our meditation on the human and spiritual journey of Saint Joseph invites us to ponder his vocation in all its richness, and to see him as a constant model for all those who have devoted their lives to Christ in the priesthood, in the consecrated life or in the different forms of lay engagement. Joseph was caught up at every moment by the mystery of the Incarnation. Not only physically, but in his heart as well, Joseph reveals to us the secret of a humanity which dwells in the presence of mystery and is open to that mystery at every moment of everyday life. In Joseph, faith is not separated from action. His faith had a decisive effect on his actions. Paradoxically, it was by acting, by carrying out his responsibilities, that he stepped aside and left God free to act, placing no obstacles in his way. Joseph is a 'just man' (Mt 1:19) because his existence is 'ad-justed' to the word of God.”
The Year for Priests
On December 19, 2010, the 4th Sunday of Advent, Benedict XVI reflected before the Angelus on the Announcement to Joseph, entrusting to his protection all priests worldwide, stressing his role of “legal Father” of Jesus in God’s plan of salvation. “In witnessing to Mary’s virginity, to God’s gratuitous action and in safeguarding the Messiah’s earthly life St Joseph announces the miracle of the Lord. Therefore let us venerate the legal father of Jesus (cf. Catechism of the Catholic Church, n. 532), because the new man is outlined in him, who looks with trust and courage to the future. He does not follow his own plans but entrusts himself without reserve to the infinite mercy of the One who will fulfil the prophecies and open the time of salvation.” said the Pope.
“Dear friends, I would like to entrust all Pastors to St Joseph, universal Patron of the Church, while I urge them to offer “Christ’s [humble] words and actions each day to the faithful and to the whole world”, (Letter Proclaiming the Year for Priests, 16 June 2009).),” he continued.
Brother Andre and Cotignac
On Sunday, October 17, 2010, the Pope canonized in Rome the Canadian Religious apostle of Saint Joseph, Brother Andre Bessette (1845-1937), who had Saint Joseph’s Oratory in Montreal built, of which he was custodian until his death.
For its part, the Diocese of Frejus-Toulon has on its territory the shrine of Cotignac, entrusted to the Brothers of Saint John, where in June of 1660 the Holy Custodian appeared to a 22-year-old shepherd of Provence, Gaspard Ricard, pointing to a large rock and saying simply: “I am Joseph, move it and you will drink.”
Louis XIV, going on pilgrimage to Cotignac, only 10 days after his ascent to the throne, entrusted France to the protection of Saint Joseph the following year, on March 19, 1661.
Posted by Padre Steve at 12:01 AM