LA GUADALUPANA and The New Evangelization 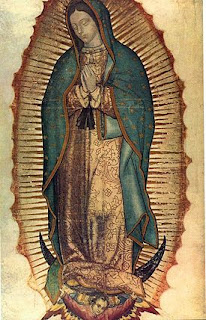 On the first full day of an international congress on "Ecclesia in America," Carl Anderson, supreme knight of the Knights of Columbus, offered reflections in light of the message given by Our Lady of Guadalupe to St. Juan Diego.
The three-day conference under way in the Vatican is to reflect on themes brought up in the synod on the Americas, which was convened 15 years ago by Blessed Pope John Paul II.
Calling to mind the Virgin Mary in her title as Empress of the Americas, Anderson noted: On Dec. 12, 1531, "the last day of the apparitions of Our Lady of Guadalupe, when St. Juan Diego took a different path in order to find a priest for his dying uncle, Our Lady met him on his detour and posed these questions: 'My youngest son, what is going on? Where are you going? Where are you headed?'"
"Today, during this Congress, we ask the very same questions: What is going on? Where are we going? Where are we headed?"
The supreme knight of the Knights of Columbus went on to say that just as it was during the 16th century in Mexico, today there is a clash of civilizations that has increased over time due to globalization.
"Juan Diego spoke of the plague killing his uncle. We confront another illness -- one just as deadly. And like Juan Diego, it is the care for the human family which brings us here today. Her intervention can come none too soon. The wisdom of Ecclesia in America is apparent," he said.
A blueprint
Anderson applauded the apostolic exhortation's view of the American continent as various countries, but a single entity with a clear vision of a "humanity encountering Christ." Calling the exhortation a "blueprint for the New Evangelization," Anderson stated that "it presents a vision of an 'enculturated' evangelization, in which our diversity is sanctified and purified in its communion in the Church by orienting us toward Christ and therefore to our brethren as well."
"Five centuries ago, our hemisphere was given the perfect example of an enculturated evangelization when Mary appeared to Saint Juan Diego. Her message of reconciliation, unity and love brought forth the great evangelization of an entire hemisphere. By her very presence, Our Lady of Guadalupe became the first and great model of Christian unity presented to all peoples and rising above national and ethnic partisanship," he said.
Anderson also drew a comparison between the time that the apparitions of Guadalupe and today's day , where there is an expectation of war.
"Do we not see in our contemporary culture, a culture which in the words of Evangelium Vitae, 'it is possible to speak in a certain sense of a war of the powerful against the weak?'  Do we not also see with Blessed John Paul II 'a structure of sin' in a culture that concludes that 'a life which would require greater acceptance, love and care is considered useless, or held to be an intolerable burden, and is therefore rejected in one way or another?'" he asked.
Anderson said that this type of war brought about a culture of death which was explained by Blessed Pope John Paul II during his papacy. "The encounter with this culture is fundamental to the new evangelization and it is fundamental to the future of the Christianity in our hemisphere," Anderson said.
Charity and laity
The head of the Knights of Columbus went on to speak on the role of Our Lady of Guadalupe as a model for all Christians and the role that charity and the laity play in the new evangelization in the Americas.
Concluding his address, Anderson told the participants of the international congress that it is crucial for the Church in North, Central and South America to "take the opportunity to find cultural unity through a shared religious identity and value system."
"In a cultural context where the Church is seen as preaching from “outside” the culture, the witness of the laity and of all Christians inside the culture is critical. This was the witness of the first Christians that sparked an interest in Christianity in this very city in what we might call the first wave of evangelization. This is the model that converted the entire American continent. And this is the model for the New Evangelization as well, not only in America, but throughout the world," Anderson concluded.
Posted by Padre Steve at 10:04 PM