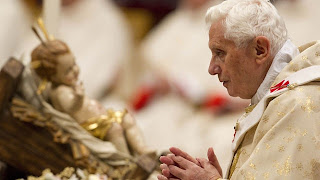 
The Dec. 20 edition of the Financial Times featured a rare article by Pope Benedict XVI in which he advises Christians to use Christmas as a time to “reassess priorities” and reflect on how to live out their faith with eternity in mind.

“While Christmas is undoubtedly a time of great joy, it is also an occasion for deep reflection, even an examination of conscience,” he says in the article.

“At the end of a year that has meant economic hardship for many, what can we learn from the humility, the poverty, the simplicity of the crib scene?” he asks readers.

Seeing an article in a newspaper by the Pope is a very unusual occurrence.

This particular story made it to print after the paper’s editorial office saw Pope Benedict’s recently published book “Jesus of Nazareth: the Infancy Narratives,” which inspired them to request him to write about Christmas.

The Vatican press office said Dec. 20 that Pope Benedict has granted interviews in the past to the BBC, a few months after his trip to the United Kingdom, and to the Italian national television station RAI in the program “A sua imagine” during Easter.

On both occasions, like today's Financial Times article, he spoke about Jesus Christ.

But this time he reflects on how Christians should examine how they can live out their faith in the world with a view to the eternal.

“Render unto Caesar what belongs to Caesar and to God what belongs to God, was the response of Jesus when asked about paying taxes,” he says in the piece that ran opposite the editorial page.
He notes that this response emerged from a question meant to trap Jesus into taking sides about Roman rule in the land of Israel.

“Jesus' answer deftly moves the argument to a higher plane, gently cautioning against both the politicization of religion and the deification of temporal power, along with the relentless pursuit of wealth,” he says.

The 85-year-old pontiff notes that “the birth of Christ challenges us to reassess our priorities, our values, our way of life.”

Christians should use Christmas as an opportunity to read the Gospel more, he counsels.

“It is in the Gospel that Christians find inspiration for their daily lives and their involvement in worldly affairs – be it in the Houses of Parliament or in the stock exchange,” he states.

“Christians should not shun the world, they should engage with it,” he adds, “but their involvement in politics and economics should transcend every form of ideology.”

The Pope also praises Christians' work for a more equitable sharing of the earth's resources, done out of a belief that they have the duty to care for the weakest and most vulnerable.

“Christians oppose greed and exploitation out of a conviction that generosity and selfless love, as taught and lived by Jesus of Nazareth, are the way that leads to fullness of life,” he explains.

And he says that because the goals of peace and justice are shared by so many, “much fruitful co-operation is possible between Christians and others.”

Pope Benedict then responds to the frequent assertion that Christians “refuse to bow down before the false gods proposed today” because of “an antiquated worldview.”

Christians will not comply, he says, because “they are free from the constraints of ideology and inspired by such a noble vision of human destiny that they cannot collude with anything that undermines it.”
He ends his Christmas reflection by speaking about Italian nativity scenes that include ancient Roman buildings in the background.

These displays show Jesus' birth as an end of the pagan world "in which Caesar's claims went virtually unchallenged."

“From the manger,” the Pope writes, “Christ calls us to live as citizens of his heavenly kingdom, a kingdom that all people of goodwill can help to build here on earth.”
Posted by Padre Steve at 5:00 AM