Egypt: at least 60 churches attacked in 4 days of violence 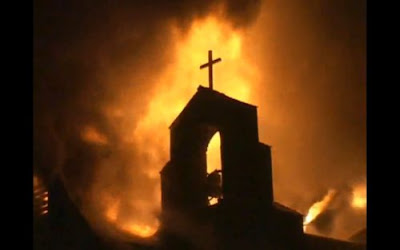 The following comes from Catholic Culture:
Following four days of violence against Christian institutions in Egypt, “nearly 40 churches have been looted and torched, while 23 others have been attacked and heavily damaged,” the Associated Press reported.
Earlier, the press office of the Catholic Church in Egypt had released a list of 58 Christian institutions, 14 of them Catholic, that had suffered attacks.
The Islamist attacks on Christian targets followed police and military action against Muslim Brotherhood protestors, who support ousted President Mohamed Morsi.
Father Rafic Greiche, the spokesman for the Egyptian Catholic bishops' conference, remarked to the Fides news service that the attacks on Christian targets occurred mostly in areas where Islamic militants are strongest. "This is not a civil war between Christians and Muslims," he said. "It is not a civil war but a war against terrorism."
In its wire story, the Associated Press offered extensive coverage of an attack on a Franciscan school in Beni Suef, a city of 230,000 in north-central Egypt.
“We are nuns. We rely on God and the angels to protect us,” said Sister Manal, the school’s principal. “At the end, they paraded us like prisoners of war and hurled abuse at us as they led us from one alley to another without telling us where they were taking us.”
A Muslim woman who formerly worked at the school “offered to take us in and said she can protect us since her son-in-law was a policeman,” she continued. “We accepted her offer.”
Sister Manal added that she saw two female employees of the school being sexually assaulted as they made their way through the crowd.
Posted by Padre Steve at 6:41 PM