Pope Francis to consecrate the world to Immaculate Heart of Mary 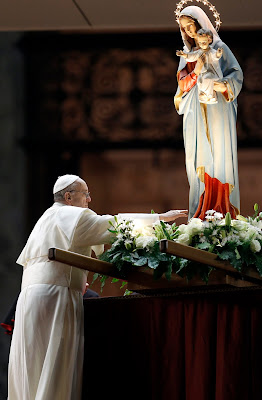 The following comes from the Catholic Herald:
Pope Francis will consecrate the world to the Immaculate Heart of Mary on October 13. The consecration will take place as part of a pilgrimage that will bring thousands of members of groups promoting Marian piety to the Vatican.
The Shrine of Our Lady of Fatima in Portugal announced in early August that Pope Francis requested that the original statue of Our Lady of Fatima be brought to the Vatican for the celebration.
Archbishop Rino Fisichella, president of the Pontifical Council for the Promotion of the New Evangelisation, wrote in a letter to Bishop Antonio Marto of Leiria-Fatima: “The Holy Father strongly desires that the Marian day may have present, as a special sign, one of the most significant Marian icons for Christians throughout the world and, for that reason, we thought of the beloved original Statue of Our Lady of Fatima.”
The statue of Our Lady of Fatima is scheduled to travel to Rome on October 12. It will be only the 11th time since the statue was made in 1920 that it has been removed from the Portuguese Marian shrine.
Pope Francis and the pilgrims will welcome the statue to St Peter’s Square during an evening prayer service on October 12. The statue will then be taken to the Rome Shrine of Divine Love, where the Diocese of Rome plans an all-night vigil.
The statue and the pilgrims will return to St Peter’s Square on October 13 for the recitation of the rosary and Mass with Pope Francis. In a press statement, the directors of the Fatima shrine said Pope Francis will consecrate the world to Mary during the event.
The Marian pilgrimage is part of the Year of Faith celebrations that will resume in late September with an international meeting of catechists.
The International Conference on Catechesis will run from September 26-28 and will bring together leaders of national and diocesan offices for religious education. After the conference they will begin a two-day Year of Faith pilgrimage to the tomb of St Peter and they will also celebrate Mass with Pope Francis.
In another Year of Faith event, Catholic families from around the world will gather in Rome’s Piazza del Popolo and walk to St Peter’s Square for a celebration of family life with Pope Francis on October 26. The Pope will celebrate Mass with the families in St. Peter’s Square on the following day.
The Year of Faith, convoked by Benedict XVI to mark the 50th anniversary of the beginning of the Second Vatican Council, will conclude on November 24.
Posted by Padre Steve at 3:00 PM

I love this Pope! How exciting....a world devotion to Mary! Thank you Pope Francis!!