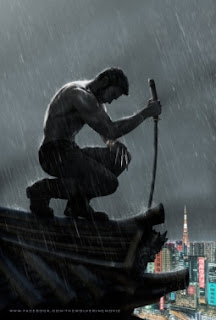 The following comes from Steven Greydanus:

Summer action spectacles, including superhero movies, have been ratcheting up the stakes so high that apocalypticism has become routine. These days, its a rarity to find a popcorn action spectacle or superhero film in which the fate of the planet, the country or at least one metropolis is not at stake, with brawling heroes and villains leveling buildings and ravaging cities, while perhaps some sort of doomsday weapon threatens even more catastrophic destruction.
The Wolverine, with Hugh Jackman reprising his best-known role as Marvel Comics’ popular mutant antihero, is that rarity. It’s true that Wolverine, or Logan as he’s also called, isn’t in the same power league as Superman or even Iron Man. Then again, neither is Batman, and look at his films. EvenThe Lone Ranger raised the action to genocidal levels, blew up bridges and spectacularly destroyed three trains (or was it only two?).

Comparatively speaking, The Wolverine could be called a human-scaled, almost intimate film. Outside a World War II prologue set near Nagasaki, no cities are threatened. When, in the film’s best set piece, the hero battles villains atop a 300-mph bullet train, few if any of the train’s passengers even notice.

The root inspiration for the film is an influential 1982 comic-book miniseries by Chris Claremont and Frank Miller, which, along with Miller’s contemporaneous work on Daredevil, revolutionized comics by blending superhero action with both Eastern and Western cinematic motifs: on the one hand, martial arts, ninjas and the like; on the other, film noir conventions, including hard-boiled first-person narration.

Voice-over narration might have been a nice touch in The Wolverine, but director James Mangold (who previously directed Jackman in the timey-wimey romcom Kate and Leopold) and the screenwriters stick with the Asian influences. After a first act set in the Canadian Yukon, Logan travels to Japan, where he finds himself caught up in a conflict involving three generations of the Yashida family, battling yakuza gangsters, armies of ninjas and a version of a character called the Silver Samurai against a backdrop that includes both modern Tokyo settings and traditional Japanese architecture.

This “Eastern Western” approach to superhero action is as fresh on the big screen today as it was in the comics 30 years ago. It’s a big part of what makes The Wolverine feel sui generis among contemporary Hollywood action and superhero movies. (Pacific Rim has a similar Asian-American fusion vibe, but it also suffers from advanced apocalyptitis — not to mention a script, characters and cast as dull as bokken, or wooden practice swords.)

Logan’s first cinematic solo outing, directed by Gavin Hood, was a rote origin story that made little effort to get inside its hero’s head. In particular, there was no real interest in what it was like to be essentially unkillable or to live for the better part of two centuries without aging past one’s prime.

The Wolverine does somewhat better in this regard. Haunted by dreams of Famke Jennsen’s Jean Grey, whom he was forced to kill in the climax of X-Men 3, Logan struggles both with guilt and with an immortal’s fear of losing everyone he cares about. The aging paterfamilias of the Yashida family suggests to him that a life without death is a life without meaning — that only mortality can allow Logan to be truly human.

Logan’s crazy healing gift, even more extreme in the movies than in the traditional comic-book depiction, make him almost as invulnerable as Superman. But what if knife cuts and bullet wounds didn’t just melt away on him?

The Wolverine plays with what mortality and vulnerability would mean for Logan, in a way reminiscent of Peter Parker’s power fluctuations in Spider-Man 2. (There are also echoes of Iron Man, with Wolverine performing wincing, life-threatening surgery on his own chest.) ChristianityToday.com critic Jackson Cuidon aptly compares The Wolverine’s approach to the 1980s shift from indestructible action heroes like Rambo to vulnerable ones like John MacClane in Die Hard.

The story includes three prominent female characters. The pink-tressed ninja chick Yukio is played by Japanese model Rila Fukushima, who, with her kickboxing, startlingly heart-shaped face and unflappably cheery demeanor, seems to have stepped right out of some manga or anime series. Elegant Mariko, granddaughter of Yashida, is played by another Japanese model, Tao Okamoto. The source material dictates that Logan will fall for Mariko, although Yukio (who winkingly styles herself Logan’s “bodyguard”) makes perhaps the stronger impression and might have been the more natural love interest.
Then there’s Russian actress Svetlana Khodchenkova as a villainess named Viper, whose presence in the story isn’t really warranted (nor for that matter are her increasingly comic-booky outfits, especially with Logan never wearing anything like a Wolverine costume) — but Khodchenkova acts as ifshe belongs, and that’s almost enough. (Unfortunately, whether because she couldn’t handle the English dialogue, or for some other reason, it seems all her lines have been redubbed by another actress.)

In my review of the earlier Wolverine movie, I complained that the character was never depicted struggling with his violent, bestial side. This film makes some effort to rectify that: It opens with Logan attempting to swear off violence altogether, though, of course, he can’t stick to it. Then it turns much more violent than the first film, with Logan making ample use of his claws (though, for the sake of the PG-13 rating, the violence remains pretty bloodless).

In his most callous, antiheroic moment, Logan uses deadly force against a disgusting but helpless enemy, not killing him only by accident. The real reason he survives, of course, is that the filmmakers don’t want to make their hero a murderer in fact; but his moral choice isn’t cross-examined as it should be.
The upshot is a striking action movie with a unique aesthetic, some intriguing themes that the movie never quite delivers on and a pretty conventional climax. Jackman’s star power remains a reliable asset; he can still make this character worth watching after playing him for 13 years in five films (or six, if you count his one-line cameo in X-Men: First Class) — both records for an actor playing a superhero. (Christopher Reeve played Superman in four films over nine years; Robert Downey Jr. has played Iron Man in four films, with a cameo in a fifth.)
It’s not a great film, but it’s a pretty good one. This year, that’s enough to make The Wolverine not only the season’s best superhero film, but arguably its best popcorn action movie: a gingery palate cleanser in a summer of overcooked Big Macs.
Posted by Padre Steve at 11:30 AM