Archbishop Chaput on faith, Francis, and the future of the "new evangelization" 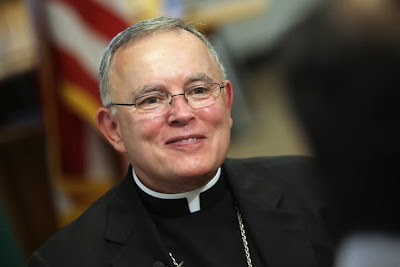 In Porta Fidei, Benedict listed three reasons for calling a Year of Faith. He hoped Christians would be led to profess the faith more fully and with conviction; to deepen their encounter with Jesus Christ in the Liturgy, especially in the Eucharist, and to witness the faith more credibly by the example of their lives. He stressed that “A Christian may never think of belief as a private act. Faith [involves] choosing to stand with the Lord so as to live with him.” Therefore faith, “precisely because it is a free act, also demands social responsibility for what one believes.”

Above all, in living the Year of Faith, Benedict wanted the Church and her pastors to recover the courage and zeal “to lead people out of the desert toward the place of life,” toward the God who gives us life in abundance. ....

One of the conceits of our age is the idea that reason and science have banished superstition and brought a new era of light to human affairs. Faith, sin, heaven, hell, God and grace–these are throwback ideas to a dark age of supernatural mumbo jumbo and witch burnings, doomed to the dustbin of history. In effect, this is the atheist version of a creation myth. It’s a sunny theory. And for people who imagine themselves as materialists, it can be very comforting.

But it’s false. As scholars like Christian Smith and many others have shown, there’s really no such thing as an “unbeliever.” We all put our faith in something. In fact, we all believe in things we can’t see or prove every day, including the premises we use to organize our understanding of reality. Science operates off first principles–in other words, assumptions about the nature of reality–that can never be proven by science itself.

Of Pope Francis, the archbishop said,
Anyone hoping for–or worried about–a break by Pope Francis from Catholic teaching on matters of substance is going to be mistaken. At the same time, the tone of this pontificate will certainly be distinct from anything in the past century. Pope Francis has been formed by experiences very unlike the factors that shaped John XXIII, Paul VI, John Paul II, and Benedict XVI.

Francis said shortly after his election that the cardinals had chosen a bishop of Rome from the “[far] end of the world.” Argentina may be the most European of Latin American countries, but Pope Francis’ world as a priest and bishop has been the global South, the problems that wound it and the poor who inhabit it.

Last Sunday’s reading from the Book of Amos (6:1, 4-7)–“Woe to the complacent in Zion, lying on beds of ivory”–would resonate with this Pope in a uniquely vivid way. So would the Gospel reading from Luke (16:19-31) about the Rich Man and Lazarus. In other words, Pope Francis comes to the moral and cultural struggles of the Church in the North from a different perspective.

And of the future and the work of the new evangelization:
I think we make a mistake when we identify the “new evangelization” too closely with techniques or technologies or programs. It’s true that using the new means of communication to advance the Gospel is important. We just founded the Cardinal John Foley Chair in social communications here at the seminary. And I’m glad we did. Today’s mass media are reshaping society. They influence how we think, what we buy and how we live. We need to understand the language and master the tools of the modern world. Through them, with God’s help, we can do a better job of bringing Jesus Christ to our people, and our people to Jesus Christ.

But the main instrument of the new evangelization is the same as the old evangelization. It’s you and me. There’s no way around those words: Repent and believe in the gospel. The world will change only when you change, whenwe change, because hearts are won by personal witness. And we can’t share what we don’t have.

Read the entire address on the Catholic Culture site.
Posted by Padre Steve at 12:00 PM