The Consolation of The Little Flower 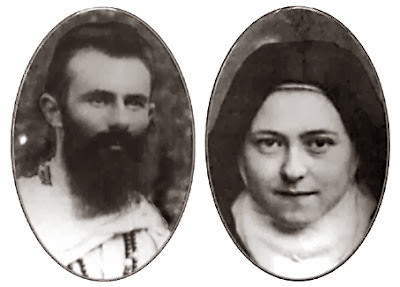 Everyone seems to love St. Thérèse. However, Father Damian Ference has a friendship with the Little Flower that didn't necessarily start with mutual "adoration".Today, he writes about how he was drawn into a relationship with this saint by way of her documented letters to a struggling seminarian.

I am embarrassed to admit that The Story of a Soul is not one of my favorite spiritual books. I like reading, and I love the saints, but I have to be honest and say that sometimes I feel like a bad priest for not gushing over the spiritual journal of Thérèse of Lisieux. Perhaps it’s because I lack piety, or because my personality is more like that of St. Jerome, or because my experience resonates with the grittiness of someone like Flannery O’Connor, who once wrote, “Stories of pious children tend to be false.” Whatever the issue, for most of my life, I felt like an odd ball for not having a devotion to the Little Flower. But that changed a few years ago.
How exactly I came upon the book I don’t remember, but I do know that in the summer of 2009 I read for the first time Maurice and Thérèse: The Story of a Love, and in it I found a new friend. That summer was a rough one for me, as I had just finished graduate studies— which proved to be a time of great learning and growth, but also of great suffering and purification— and I was beginning my new assignment at the seminary. I was the youngest on the faculty at the time, and the transition wasn’t easy. Few transitions are. But Thérèse was there to help me.

Maurice and Thérèse is basically a collection of letters between a seminarian named Maurice andThérèse of the Child Jesus, (with and introduction and commentary by Bishop Patrick Ahern.) Their friendship came about when Maurice, who had just finished making his annual retreat, felt called to request some prayerful support as he journeyed toward the priesthood as a seminarian. He wrote the mother superior of Carmel (on October 15th1895, the feast day of Saint Teresa of Avila), who unbeknownst to him, was Thérèse’s biological sister, and he asked her if she would assign a sister to pray for him. Mother agreed, and she soon charged Sr. Thérèse to be Maurice’s brother in prayer.
At first Maurice would write an occasional letter to Mother, informing her of his progress in the seminary and thanking her for the gift of Sr.Thérèse as his new prayer partner. But when Mother became ill, Thérèse was permitted to write Maurice herself. And write she did.
Maurice and Thérèse exchanged 21 letters over the last two years of the Little Flower’s life, and their exchanges were deep, intimate, affectionate, comforting, and filled with love. Thérèse was a saint, and Maurice was not. He had a very difficult life from the very start. In an early letter to Thérèse he explains, “Dear Little Sister, you were deprived of maternal caresses when you were very young. Imagine, I never even saw my own mother. More than that, she died on account of me. Until I was ten or eleven I had no idea of this misfortune, accepting an aunt’s devotion and kisses as those of a mother.” Maurice also mentions a past sin as “the worst blunder of all” without going into detail, and he accounts his many hardships to her, both in his spiritual and physical life. Thérèse was there to comfort him.

The beauty of the saint’s letters is that the Little Flower simply pours out her love to Maurice, despite all his weakness. She never condemns him, or chides him, or makes him feel inferior to her – she loves him with the same love that Jesus loved her. And she doesn’t mince words – she makes her love very clear to him: “Oh my little brother, how I would love to be able to pour the balm of consolation into your heart!” It’s no wonder that Maurice responded by writing, “There is no doubt that Jesus is the Treasure, but I found Him in you. And He was easier to approach.”
Christians are supposed to be other Christs. By our baptism we are configured to Christ – we are literally Christened. Why? So that we can be Christfor others and bring him to others. Therese knew this reality, and she embodied it. Of course, she’s a universal saint of the Church, so she loves everyone and she’s there for everyone – but she also revealed the love of Jesus in a very particular and intentional way to her little brother, Maurice, the troubled seminarian who would eventually be ordained a priest.
When I read the letters for the first time back in 2009, about halfway through them, I decided that I would pretend that I was Maurice, so that whatever Thérèsewrote to him, she also wrote to me. And this is how I continue to read these letters today. After all, if the Little Flower told you, “Truly, only in heaven will you know how dear you are to me. I feel our souls are made to understand each other,” how could you resist such consolation?
The truth is, that when it comes to holiness, I’m a lot more like Maurice thanThérèse. My prayer, however, is that through her loving intercession, that might change.
Posted by Padre Steve at 11:08 AM