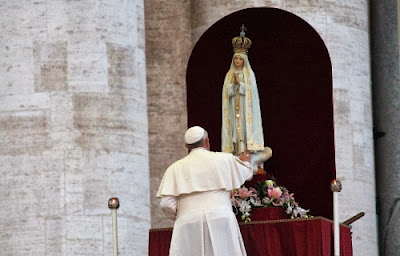 (CNA/EWTN News)  Pope Francis led a Marian prayer vigil Saturday, stressing that the Virgin Mary leads Christians to the mercy of God who can untie “all knotted hearts.”

Each one of us has “knots” in our souls, caused by sin, said Pope Francis.

“These knots take away our peace and serenity,” he said at the Oct. 12 vigil in St. Peter’s Square.

He acknowledged that some might believe they are without hope and say “But Father, mine can’t be untied.”

“That’s a mistake. All knots in the heart, all knots in the conscience, can be untied,” he emphasized.
If we ask Mary, “the woman of faith” for help, he continued, “she will surely say to us, ‘go forward, go to the Lord, he will understand you.’ And she takes us with the hand of a mother to the embrace of the Father, to the Father of mercy.”

As the crowds prayed, the Pope spoke of Mary’s example and reflected on her desire to lead others away from the “knots” of sin to divine healing. Mary is “the mother who patiently and lovingly brings us to God, so that he can untangle the knots of our soul by his fatherly mercy.”

In preparation for the Pope’s consecration of the world to Mary on Sunday, the original statue of Our Lady of Fatima was brought to St. Peter’s Square from the shrine in Portugal. Pope Francis took a moment to pray before the image, which depicts how Mary appeared to three shepherd children in Fatima, Portugal in 1917.

The crowds of diverse pilgrims held up various images of Mary, celebrating her universal motherhood. The vigil, which interspersed international music with scripture readings that served as points of meditation and prayer.

Pope Francis taught that Mary, through her witness of faith, is the paradigm for all believers.

“Mary first conceived Jesus in faith and then in the flesh, when she said ‘yes’ to the message God gave her through the angel,” he told the vigil audience.

The Pope then challenged his listeners to consider their own faith more profoundly:

“Do we think that Jesus’ Incarnation is simply a past event which has nothing to do with us personally?

Believing in Jesus means giving him our flesh with the humility and courage of Mary, so that he can continue to dwell in our midst.”

The crowds cheered as Pope Francis preached about following God.

“How was Mary’s faith a journey? In the sense that her entire life was to follow her Son: he is the way, he is the path!” he said.

The path of any Christian is the “way of the Cross,” even and especially for Mary.

“When Jesus was rejected, Mary was always there, with Jesus, following Jesus, in the midst of the people. And she heard the gossip, the hatred of those who did not love the Lord. And this cross, she was carrying,” he told the pilgrims.

During Jesus’ crucifixion, Mary’s faith was “like a little flame burning in the night.”

“And when she received word that the tomb was empty, her heart was filled with the joy of faith: Christian faith, in the death and resurrection of Christ, because faith always brings us joy. And she is the mother of joy!” he exclaimed.

“Mary teaches us to go forward with joy and live this joy!”

The prayer vigil at St. Peter’s Square preceded a world-wide vigil at various Marian sites throughout the globe.

These opportunities for prayer are being held as special events during the Catholic Church’s observance of the Year of Faith.
Posted by Padre Steve at 9:00 AM