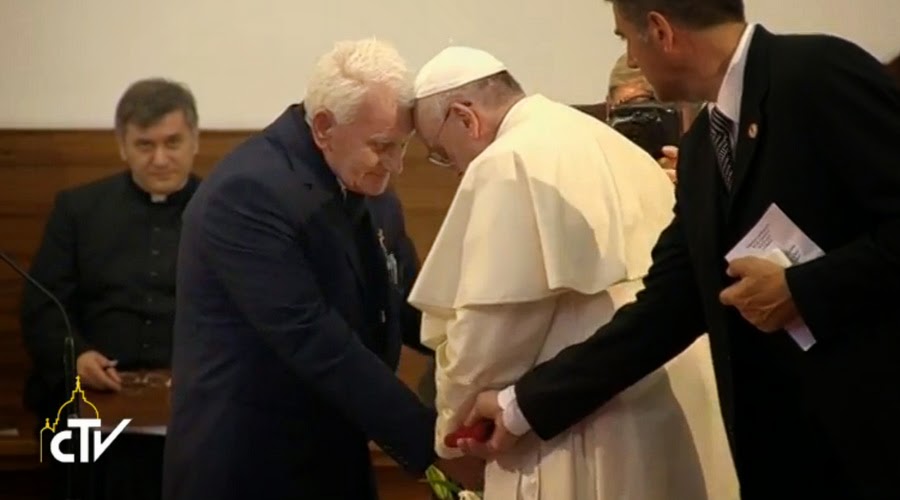 The following comes from the Vatican News:

The Church which — 20 years ago, emerged from the winter bloodstained by persecution, and from the catacombs from which a dictatorial communist and ostensibly atheist regime compelled her — is marked by suffering, including that of two octogenarians.

At the meeting with priests, religious and representatives of the lay world held on Sunday afternoon, 21 September in Tirana’s new Cathedral dedicated to St Paul, the testimony of Fr Ernest Simoni, 84, and Sr Marije Kaleta, 85, was the most touching moment of Pope Francis’ visit. The Pontiff was moved to tears at the end of the priest’s account. Tortured and condemned to death as an enemy of the people, Fr Ernest’s sentence was subsequently commuted to imprisonment. Of the very few survivors of the persecution, Fr Ernest, who spent 27 years in various concentration camps and in forced labour, is one of only two priests still living. “While imprisoned, I celebrated Mass in Latin by heart, as I secretly confessed and distributed communion”, he recalled.
With tears in his eyes, amid the unending applause of those present, everyone visibly moved, Francis helped the priest, who had knelt to kiss the Pontiff’s ring, back to his his feet, engaged him in a lengthy embrace and kissed the priest’s hand in turn. These moments of great intensity were then followed with Sr Marije’s account. After living for seven years in the convent of the Stigmatine Sisters, she was forced to profess her faith in hiding, without however, renouncing her testimony. The Pope embraced her for a long time as well. And immediately afterwards at the moment for his homily, a meditation during the recitation of vespers, he put aside his prepared text — the only time that day — to speak extemporaneously, as he was still so touched by their testimony. A reflection spoken from the heart, concluding with a validation: “Let us go home thinking: today we have touched martyrs”.