Saint of the Day: Robert Bellarmine 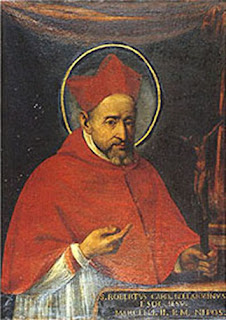 Born at Montepulciano, Italy, October 4, 1542, St. Robert Bellarmine was the third of ten children. His mother, Cinzia Cervini, a niece of Pope Marcellus II, was dedicated to almsgiving, prayer, meditation, fasting, and mortification of the body.

Robert entered the newly formed Society of Jesus in 1560 and after his ordination went on to teach at Louvain (1570-1576) where he became famous for his Latin sermons. In 1576, he was appointed to the chair of controversial theology at the Roman College, becoming Rector in 1592; he went on to become Provincial of Naples in 1594 and Cardinal in 1598.

This outstanding scholar and devoted servant of God defended the Apostolic See against the anti-clericals in Venice and against the political tenets of James I of England. He composed an exhaustive apologetic work against the prevailing heretics of his day. In the field of church-state relations, he took a position based on principles now regarded as fundamentally democratic - authority originates with God, but is vested in the people, who entrust it to fit rulers.

This saint was the spiritual father of St. Aloysius Gonzaga, helped St. Francis de Sales obtain formal approval of the Visitation Order, and in his prudence opposed severe action in the case of Galileo. He has left us a host of important writings, including works of devotion and instruction, as well as controversy. He died in 1621.
Posted by Padre Steve at 5:00 AM