Saints of the day: Cornelius and Cyprian 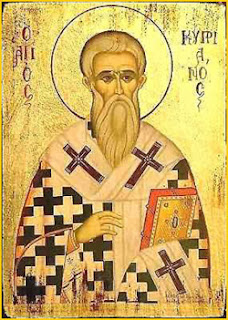 Cyprian is important in the development of Christian thought and practice in the third century, especially in northern Africa.

Highly educated, a famous orator, he became a Christian as an adult. He distributed his goods to the poor, and amazed his fellow citizens by making a vow of chastity before his baptism. Within two years he had been ordained a priest and was chosen, against his will, as Bishop of Carthage (near modern Tunis).

Cyprian complained that the peace the Church had enjoyed had weakened the spirit of many Christians and had opened the door to converts who did not have the true spirit of faith. When the Decian persecution began, many Christians easily abandoned the Church. It was their reinstatement that caused the great controversies of the third century, and helped the Church progress in its understanding of the Sacrament of Penance.

Novatus, a priest who had opposed Cyprian's election, set himself up in Cyprian's absence (he had fled to a hiding place from which to direct the Church—bringing criticism on himself) and received back all apostates without imposing any canonical penance. Ultimately he was condemned. Cyprian held a middle course, holding that those who had actually sacrificed to idols could receive Communion only at death, whereas those who had only bought certificates saying they had sacrificed could be admitted after a more or less lengthy period of penance. Even this was relaxed during a new persecution.

During a plague in Carthage, he urged Christians to help everyone, including their enemies and persecutors.

A friend of Pope Cornelius, Cyprian opposed the following pope, Stephen. He and the other African bishops would not recognize the validity of baptism conferred by heretics and schismatics. This was not the universal view of the Church, but Cyprian was not intimidated even by Stephen's threat of excommunication.

He was exiled by the emperor and then recalled for trial. He refused to leave the city, insisting that his people should have the witness of his martyrdom.

Cyprian was a mixture of kindness and courage, vigor and steadiness. He was cheerful and serious, so that people did not know whether to love or respect him more. He waxed warm during the baptismal controversy; his feelings must have concerned him, for it was at this time that he wrote his treatise on patience. St. Augustine (August 28) remarks that Cyprian atoned for his anger by his glorious martyrdom.

The following comes from the Saints and Angels site: 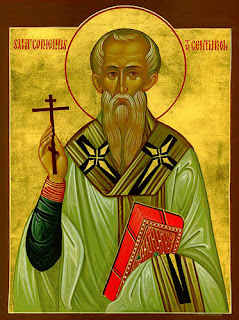 Cornelius whose feast day is September 16th. A Roman priest, Cornelius was elected Pope to succeed Fabian in an election delayed fourteen months by Decius' persecution of the Christians. The main issue of his pontificate was the treatment to be accorded Christians who had been apostasized during the persecution. He condemned those confessors who were lax in not demanding penance of these Christians and supported St. Cyprian, Bishop of Carthage, against Novatus and his dupe, Felicissimus, whom he had set up as an antibishop to Cyprian, when Novatus came to Rome. On the other hand, he also denounced the Rigorists, headed by Novatian, a Roman priest, who declared that the Church could not pardon the lapsi (the lapsed Christians), and declared himself Pope - the first antipope. The two extremes eventually joined forces, and the Novatian movement had quite a vogue in the East. Meanwhile, Cornelius proclaimed that the Church had the authority and the power to forgive repentant lapsi and could readmit them to the sacraments and the Church after they had performed proper penances. A synod of Western bishops in Rome in October 251 upheld Cornelius, condemned the teachings of Novatian, and excommunicated him and his followers. When persecutions of the Christians started up again in 253 under Emperor Gallus, Cornelius was exiled to Centum Cellae (Civita Vecchia), where he died a martyr probably of hardships he was forced to endure.
Posted by Padre Steve at 5:00 AM