Saint of the day: John Chrysostom 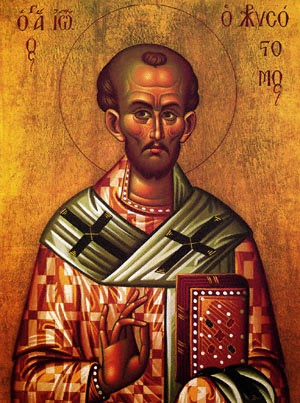 The following comes from Communio:

Today’s saint of the Eastern Church, Saint John Chrysostom (c. 347-407), a fourth century bishop and Doctor of the Church, known as an eloquent speaker and teacher of the faith hence beings nicknamed the golden tongue of the faith. His homilies, as you will note below, are insightful. Because of the tensions with the political leaders John was exiled several times and ultimately died of exhaustion. Among the churches, Saint John has four different feast days.
One his meditations on the Gospel of Matthew found in the Office of Readings follows:
Would you honor the body of Christ? Do not despise his nakedness; do not honor him here in church clothed in silk vestments and then pass him by unclothed and frozen outside. Remember that he who said, ‘This is my Body’, and made good his words, also said, ‘You saw me hungry and gave me no food’, and, ‘in so far as you did it not to one of these, you did it not to me’. In the first sense the body of Christ does not need clothing but worship from a pure heart. In the second sense it does need clothing and all the care we can give it.
We must learn to be discerning Christians and to honor Christ in the way in which he wants to be honored. It is only right that honor given to anyone should take the form most acceptable to the recipient not to the giver. Peter thought he was honoring the Lord when he tried to stop him washing his feet, but this was far from being genuine homage. So give God the honor he asks for, that is give your money generously to the poor. God has no need of golden vessels but of golden hearts.
I am not saying you should not give golden altar vessels and so on, but I am insisting that nothing can take the place of almsgiving. The Lord will not refuse to accept the first kind of gift but he prefers the second, and quite naturally, because in the first case only the donor benefits, in the second case the poor gets the benefit. The gift of a chalice may be ostentatious; almsgiving is pure benevolence.
What is the use of loading Christ’s table with gold cups while he himself is starving? Feed the hungry and then if you have any money left over, spend it on the altar table. Will you make a cup of gold and without a cup of water? What use is it to adorn the altar with cloth of gold hangings and deny Christ a coat for his back! What would that profit you? Tell me: if you saw someone starving and refused to give him any food but instead spent your money on adorning the altar with gold, would he thank you? Would he not rather be outraged? Or if you saw someone in rags and stiff with cold and then did not give him clothing but set up golden columns in his honor, would he not say that he was being made a fool of and insulted?
Consider that Christ is that tramp who comes in need of a night’s lodging. You turn him away and then start laying rugs on the floor, draping the walls, hanging lamps on silver chains on the columns. Meanwhile the tramp is locked up in prison and you never give him a glance. Well again I am not condemning munificence in these matters. Make your house beautiful by all means but also look after the poor, or rather look after the poor first. No one was ever condemned for not adorning his house, but those who neglect the poor were threatened with hellfire for all eternity and a life of torment with devils. Adorn your house if you will, but do not forget your brother in distress. He is a temple of infinitely greater value.
Posted by Padre Steve at 9:46 AM