Saint of the Day: Benedict of Nursia 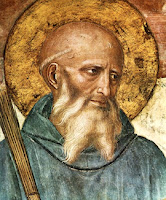 Today is the feast of St. Benedict of Nursia! Here is some good info on him! I got most of it from the Monastery of Christ in the Desert website. This is a really beatiful monastery that I have visited for a retreat. Enjoy!

Saint Benedict was born around the year 480 in the district of Nursia (present-day Norcia), in Umbria, central Italy. He is regarded as the "Father of Western Monasticism" and is "Co-patron of Europe" along with Saints Cyril and Methodius.

As a young man, Benedict was sent to Rome for studies but left after a short stay, desiring to dedicate his life to God. He went to live in an isolated place near Subiaco, not far from the ruins of Emperor Nero's summer villa, about fifty miles from Rome. Today the cave is the celebrated shrine called "Sacro Speco" (The Holy Cave) and is one of Europe's most beautiful sanctuaries. At Subiaco, Benedict lived a life of solitude and prayer for about three years with the support from a monk named Romanus. Benedict's time as a hermit was interupted for a short period when he became the superior of a group of unruly monks. Ultimately unhappy with his guidance, they tried to poison him. He then withdrew to the cave at Subiaco once again.

Eventually, Benedict's sanctity attracted disciples and in time, twelve small monasteries were established around Subiaco, with Benedict as the spiritual father of them all.

Around the year 530 Benedict left Subiaco with some of his sisciples for Monte Cassino, halfway between Rome and Naples, where he began a single, close-knit community on a mountain top. There he remained until his death around the year 547. Is was at Monte Cassino that Benedict completed his "Rule for Monks," basing it on earlier monastic literature as well as his own original material. Today, the "Rule of Saint Benedict," as it is commonly called, is considered one of the most important factors in the development of Christian Europe. In time, the Rule became the norm for all monks and nuns in the West. During his lifetime, the monastery at Monte Cassino grew and a foundation was made south of Rome, at Terracina. The monasteries at Subiaco continued as well.

Benedict had a sister, Scolastica, who was consecrated to God from her youth and died shortly before her saintly brother. Both of them were buried at Monte Cassino in the oratory dedicated to Saint John the Baptist. Saint Scholastica's feast day is on February 10th and Saint Benedict's is on March 21st and July 11th. The March date is generally considered to be the date on which he died.

The life of Saint Benedict is found in "The Dialogues" written by Pope St. Gregory the Great some forty years after Benedict's death. It is not a biography as we know the genre today, but the details supply us with a basic outline of the life and times of Saint Benedict. Among the titles given to Saint Benedict over the centuries are the following: "Messenger of Peace, Architect of Unity, Teacher of Culture and Civilization, Father of Western Monasticism, Herald of the Christian Faith, and Father of the Whole of Europe." Today, Benedict's disciples, both men and women, can be found on every inhabited continent of the world, leading lives dedicated to "Prayer and Work," as the holy father Benedict taught in his rule and by his life.

For more on St. Benedict check out the Patron Saints Index!
Posted by Padre Steve at 5:00 AM

Thank GOD for giving us St. Benedict as an example of how a good christian should live and work. His life shows what one person can do to have a profound effect on the world. I thank St. Benedict personally for interceding on my behalf, and praise Jesus Christ for his loving mercy. I wear the medal cross of St. Benedict and treasure it dearly.

What a beautil rule: Ora et labora; this balance between work and prayer fulfills our deepest desires and needs. The rule even includes a section on food, which our Western world would benefit greatly from.