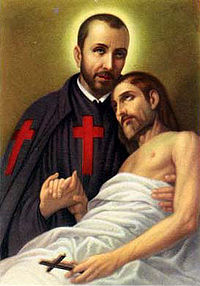 On July 18 the U.S. Catholic Church celebrates the feast day of Saint Camillus de Lellis, who turned from his life as a soldier and gambler to become the founder of an order dedicated to caring for the sick. In some other countries, he is celebrated on the anniversary of his death, July 14.

Camillus was born during 1550 in the Abruzzo region of Naples in present-day Italy. His mother died during his infancy, and he lost his father, a former army officer, six years later. The young man took after his late father professionally, serving in the armies of Venice and Naples until 1574.

During his military service Camillus developed a severe gambling problem. He repented of the habit in 1575, when he found himself impoverished and forced to do menial work for a group of Franciscans. In February of that year he resolved to change his life and soon sought to join the order.

A wound in one of his legs, however, was seen as incurable and kept him from becoming a Franciscan. After this rejection, he traveled to Rome and worked for four years in a hospice. Committed to a life of prayer and penance, he wore a hair shirt and received spiritual direction from St. Philip Neri.

Grieved by the quality of service given to the sick, Camillus decided to form an association of Catholics who would provide them with both physical and spiritual care. He studied for the priesthood, and was ordained in 1584.

Members of his order worked in hospitals, prisons, and in the homes of those afflicted by disease. The order's original name, the “Fathers of a Good Death,” reflected the desire to aid in their spiritual salvation and prepare the dying to receive their last rites.

Later known as the Order of the Ministers of the Sick, or simply as the “Camillians,” the group received papal approval in 1586 and was confirmed as a religious order in 1591. In addition to the traditional vows of poverty, chastity, and obedience, they took a vow of unfailing service to the sick.

Camillus himself suffered physical ailments throughout his life. His leg wound failed to heal over the course of almost five decades, in addition to which he suffered from sores and severe kidney trouble. But he is said to have spent time with the sick even while unable to walk, by crawling from bed to bed.
The founder of the Ministers of the Sick lived to assist at a general chapter of his order in Rome during 1613, and to make a last visitation of many of their hospitals. Learning that he himself was incurably ill, Camillus responded: “I rejoice in what has been told me. We shall go into the house of the Lord.”

Receiving the Eucharist for the last time, he declared: “O Lord, I confess I am the most wretched of sinners, most undeserving of your favor; but save me by your infinite goodness. My hope is placed in your divine mercy through your precious blood.”

After giving his last instructions to his fellow Ministers of the Sick, St. Camillus de Lellis died on July 14, 1614. He was canonized by Benedict XIV in 1746, and later named – along with Saint John of God – as one of the two main co-patrons of nurses and nursing associations in 1930.
Posted by Padre Steve at 5:30 AM