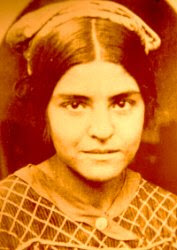 Today the Church recalls the memorial of Blessed Maria Gabriella. Her short life was dedicated to the cause of Christian unity. The following comes from the Patron Saints Index:

Born to a family of shepherds. As a child she was described as obstinate, critical, protesting, and rebellious - but loyal, and obedient; she would say no to a request - but act on it at once. At 18 she became gentler, her temper abated, she became involved in prayer and charity, and joined "Azione Cattolic," a Catholic youth movement. At 21 she entered the Trappestine monastery of Grottaferrata. When she was accepted, her attitude finally became "Now do what You will."

When the community's leader explained a request for prayer and offering for the great cause of Christian Unity, Maria Gabriella felt compelled to offer her young life to the cause. Though she'd never been sick before, she suddenly developed tuberculosis. In a mere 15 months spent in prayer for Unity, it took her to her death.
Posted by Padre Steve at 9:37 AM