Archbishop Sheen’s sainthood cause moving ahead

Our Father from Catholic Core on Vimeo. 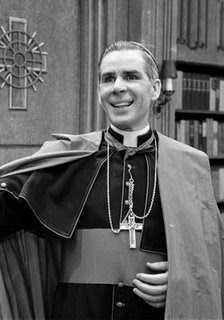 The following comes from the Kresta in the Afternoon site:

The beatification cause of Archbishop Fulton J. Sheen will advance this May when Bishop Daniel J. Jenky of Peoria will present Pope Benedict XVI with the position paper summarizing the life and holiness of the famous television evangelist.

“America is in need of a saint like Archbishop Sheen. He brought so many people closer to Christ during his life here on earth and continues to do so even today through his many writings, television and radio shows,” explained Fr. Andrew Apostoli, the vice postulator tasked with preparing and advocating Sheen’s cause.

The formal filing of the position paper, called a “positio,” with the Congregation for Saints’ Causes is the initial step in the Vatican’s process to determine whether Archbishop Sheen should be beatified and canonized as a saint.

Sheen was raised in Peoria, Ill. and ordained a priest of the Diocese of Peoria in 1919.

Bishop Jenky became the Bishop of Competence sponsoring Sheen’s cause in 2002. He is also president of the Peoria-based Archbishop Sheen Foundation. The bishop will present the position paper on Sheen’s cause to the Pope on May 25 at the end of the weekly general audience.

In November 2010 the Diocese of Peoria suspended its promotion of Archbishop Sheen’s cause because of a dispute with the Archdiocese of New York over the final resting place of his remains. The diocese resumed its work in January 2011.

Msgr. Stanley Deptula, executive director of the Archbishop Sheen Foundation, said that once the Congregation for Saints’ Causes officially approves the paper they will begin the investigation into an alleged healing attributed to Sheen.

“The foundation believes the healing is a miracle granted through the late archbishop’s intercession,” Msgr. Deptula explained. Details about supposed miracles are often not discussed while the claim is under investigation by the Vatican.

Deptula and Apostoli will accompany Bishop Jenky to present the positio, as will Msgr. Richard Soseman, the foundation’s foreign liaison; Dr. Louis Varela, the foundation’s chairman of the board; and Maria Alicia Varela, a foundation board member.

Archbishop Sheen was a charismatic author and a radio and television personality. He broadcast his famous television program “Life is Worth Living” from New York City, where he was ordained an auxiliary bishop in 1951.

Sheen later served as Bishop of Rochester. After his death in 1979, he was buried in the crypt of St. Patrick’s Cathedral in New York City.
Posted by Padre Steve at 5:00 AM