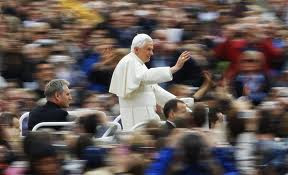 On the eve of Holy Thursday, the Pope dwelt upon Christ’s agony in the Garden of Gethsemane when the apostles slept as Jesus suffered the torment of his impending crucifixion.

Pope Benedict said of those moments, “It’s our very sleepiness to the presence of God that renders us insensitive to evil: we don’t hear God because we don’t want to be disturbed, and so we remain indifferent to evil.” He said that such a disposition leads to “a certain callousness of the soul towards the power of evil.”

The Pope was keen to stress that Christ's rebuke to his slumbering apostles – “stay awake and keep vigil” – applies to the entire history of the Church. Jesus message, the Pope said, is a “permanent message for all time because the disciples’ sleepiness is not problem of that one moment, rather of the whole of history, ‘the sleepiness’ is ours, of those of us who do not want to see the full force of evil and do not want to enter into his Passion.”

The next three days are the most sacred in the Christian calendar. Those three days, known in Latin as the “Triduum,” observe the crucifixion, death and resurrection of Jesus Christ nearly 2000 years ago in Palestine. The Pope observed, “The liturgies of these days invite us to ponder the loving obedience of Christ who, having become like us in all things but sin, resisted temptation and freely surrendered himself to the Father’s will.”

The next major event on Pope Benedict’s calendar will be his “Chrism Mass” tomorrow morning in St. Peter’s Basilica. There, around 1,600 clergy from the Diocese of Rome and Roman colleges will renew their ordination promises.
Posted by Padre Steve at 11:31 AM