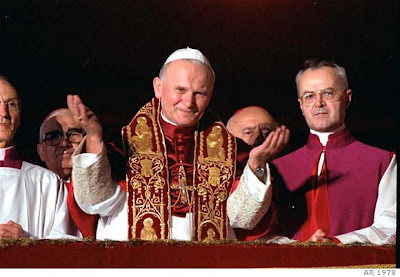 Pope John Paul II’s biographer is welcoming the announcement of a new feast day for the soon-to-be beatified pontiff. The Vatican has declared that Oct. 22, the day he became Pope, will now mark the occasion.

“I think it's an entirely appropriate date, for this was the day that Karol Wojtyla formally began his service to the universal Church and issued that ringing cry to freedom and evangelism: "Be not afraid! Open the doors to Christ," George Weigel told CNA.

As is customary with beatified persons, the feast day will be inserted into the Church calendar of only those places where Pope John Paul II lived and worked – the diocese of Rome and the dioceses of Poland.

In other places, local bishops will have to formally ask the Vatican for permission to mark the feast day. The same restrictions also apply to the naming of churches for Pope John Paul.

In a break with custom, though, the Vatican is giving Catholics throughout the world a year to celebrate a Mass in thanksgiving for the beatification.

In an April 12 statement the Vatican said this is due to “the exceptional character of the beatification of the Venerable John Paul II, recognized by the entire Catholic Church spread throughout the world.”

The Vatican has also unveiled the specific prayer, or collect, to be used at any feast day celebration or thanksgiving Mass. It reads:

“O God, who are rich in mercy

and who willed that Blessed John Paul II

should preside as Pope over your universal Church,

grant, we pray, that instructed by his teaching,

we may open our hearts to the saving grace of Christ,

the sole Redeemer of mankind,

Who lives and reigns.”

“The evocation of the divine mercy, the face of the Father that John Paul II believed was being turned to the world in a special way at this moment of history … also brings to mind the late Pope's inaugural encyclical, ‘The Redeemer of Man,’” he said.

Pope John Paul will be beatified on May 1 and will then be given the title “Blessed.” “Beatification” is the second step in a three-stage process the Catholic Church has created for declaring a deceased person a saint.
Posted by Padre Steve at 11:48 AM